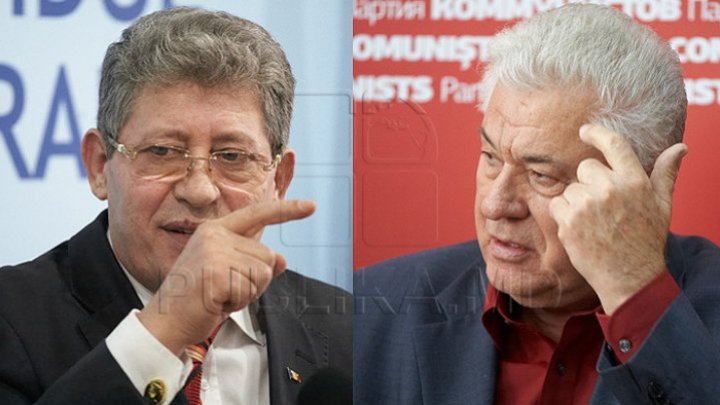 Curses, insults and tough replies in Parliament. Vladimir Voronin and Mihai Ghimpu had unpleasant words after Liberal deputy criticized a bill that provides for the approval of the public monuments register.

"It is well known that the Soviet regime and the fascist regime are totalitarian regimes that must be condemned. In the register of public monuments, there should be no monuments glorifying the Soviet, fascist, Nazi or other totalitarian power," said Roman Boţan, Liberal deputy.

"Do you understand about what you're talking? About monument, about history. Do you think history starts from you?", Communist MP Vladimir Voronin.

"Mr. Voronin, if you want to continue, I have a great request, not to insult, do not use inappropriate words", intervened the Vice-President of Parliament, Valeriu Ghileţchi.

Voronin ignored the warnings and began to curse.

"My goodness! I want election to vote again in Parliament", cursed Voronin.

"I ask you to turn off microphones of ones who abstain", replied PL deputy, Ion Apostol.

"All those who have been part of the Communist Party and are now part of the Socialist Party are also lightly fallen from the lewd. Please bring a doctor here for Mr. Voronin, "said PL deputy, Mihai Ghimpu.

Parliament Speaker Andrian Candu has asked deputies to give up mutual insults.

"We must behave within the limits of ethics and fairness," said Andrian Candu, Parliament Speaker.

The Socialists have proposed that Mihai Ghimpu be rebuked for barbaric behavior.