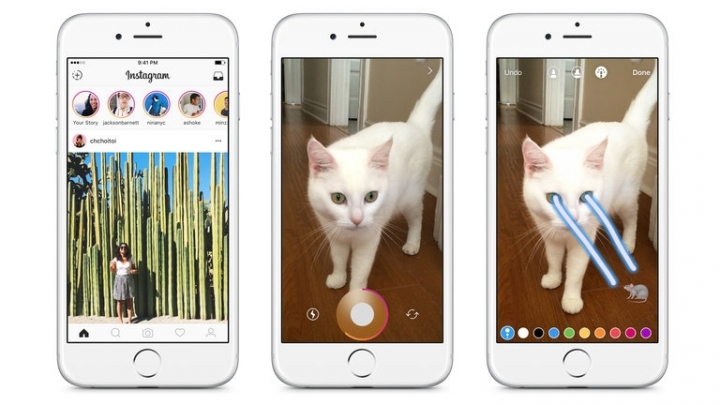 Instagram Takes a Page From Snapchat, and Takes Aim at It, Too

The popular disappearing-message start-up rebuffed a $3 billion acquisition offer from Facebook in 2013. Snapchat’s service has since continued to grow rapidly by capturing the hearts — and thumbs — of the young audiences that advertisers love. Facebook has failed in several attempts at cloning Snapchat.

Now Instagram, the photo-sharing app owned by Facebook, is for the first time taking its own stab at Snapchat.

On Tuesday, Instagram introduced Instagram Stories, which lets people share photos and videos that have a life span of no more than 24 hours with friends who follow them. The service bears a striking resemblance — some might say it is a carbon copy — to Snapchat Stories, a photo- and video-sharing format where the stories also disappear after no more than 24 hours.

The move could ignite a head-to-head battle between Instagram and Snapchat, which have long lurked in each other’s territories but have not faced off directly. Both are mobile apps that use primarily visual media. Both became popular first with young people. And both are now trying to improve their businesses by increasing digital advertising in formats like Stories.

Instagram Stories aims to lower the bar for sharing all types of photos and video — and not just the carefully planned and painstakingly touched-up photographs that are typical of the service, Mr. Systrom said.

“Our mission has always been to capture and share the world’s moments, not just the world’s most beautiful moments,” he said. “Stories will alleviate a ton of the pressure people have to post their absolute best stuff.”

A spokeswoman for Snapchat declined to comment on Instagram’s new product.

Cathy Boyle, a mobile analyst for the research firm eMarketer, said Instagram’s move “validates what Snapchat is doing.” Advertisers are particularly attracted to Snapchat, she said, because the messaging app offers “a place to connect with users in this very personal, immersive way.”

Snapchat Stories, a departure from the company’s original direct messaging service, has been a hit for essentially acting as a 24-hour photo and video diary viewable only by those who follow the user.

The rivalry between Snapchat and Instagram was evident in a report published last week from the investment banking firm Jefferies, which predicted that Snapchat’s growth could detract from Instagram’s advertising momentum by as soon as the fourth quarter of this year.

“Snapchat consists of a more active user base, which creates more content than the average Instagram user,” the report said. “Given its younger demographic, we think Instagram looks the most at-risk from the rise of Snapchat, especially on a longer-term basis.”

Instagram Stories is now available in a separate section of the app, where users can shoot photos or video, which, as with Snapchat, can be adorned with text or drawings. Those are then combined to create a story, which is viewable by friends for 24 hours. People can make stories public or private, and can choose if they want only a subsection of their followers to view them.