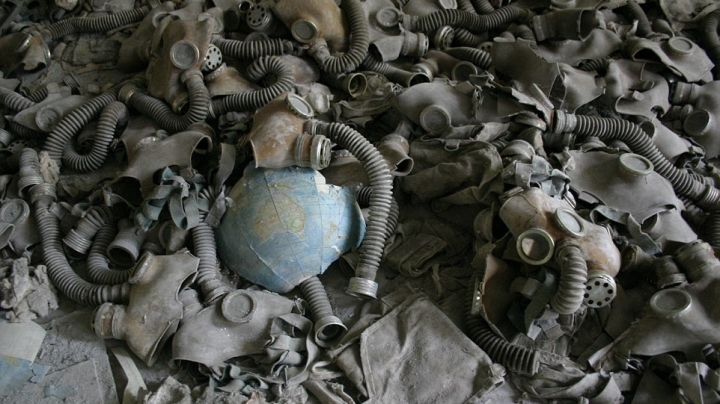 Working inside the radioactive ruins of the worst nuclear disaster in history, Robert Maxwell takes a few simple steps to stay safe.

He doesn’t lick the walls, he doesn’t eat the plants and he doesn’t touch The Claw.

Chernobyl, Ukraine, was the scene of a catastrophic nuclear accident in 1986 and 30 years on Mr Maxwell is the only archaeologist to have braved the ruined city in the name of research.

On 26 April 1986 a reactor exploded at the Chernobyl Power Plant, creating a plume of radioactive smoke that smothered the city of Pripyat and surrounding areas.

Hundreds of thousands of people were evacuated and the lingering effects of exposure have contributed to thousands of deaths from cancer since.

According to Daily Mail, Mr Maxwell described the haunting scenes that met him when he arrived to research the now-deserted city.

Mr Maxwell said: ‘In 1986 they established an exclusion zone around the power plant. Anyone who was inside was decontaminated and evacuated. During the evacuation they told the residents that they were moving for a little while and not to bother about bringing their furniture or bringing their pets. When they finally left the area they were told they would never be going home.’

Save the efforts of workers still cleaning up the most contaminated parts of the city, Chernobyl has been untouched since.

The radiation levels remain so high within the exclusion zone that visitors are warned not to touch anything.

Mr Maxwell said: ‘When you first get into Chernobyl they take you to a briefing building and you get told how to stay safe in the area. They said not to touch anything, not to step on any plants or any vegetation. Don’t kneel on anything and don’t take anything with you. After that it’s up to you. Once I was inside I went to some of the areas that were considered too dangerous – they still had dangerous levels of radioactivity. But if you understand radioactivity you can reduce the risk. As long as I’m not licking the walls or picking the plants you’re alright.

But there are places that you just can’t go. I did a bit of research on an object there called The Claw, which they had used to move a lot of the contaminated stuff. That thing was so radioactive that if I had touched it I would’ve been risking my life.’

One photo shows rusting gas marks tossed on the floor of a children’s classroom, heaped in a pile around a smashed globe on the floor. Another image shows a child’s doll covered in cobwebs on a windowsill where it has sat for thirty years since it was forgotten during the hurried evacuation.

Mr Maxwell, a contemporary archaeologist, said it was the sense of immediate abandonment within the city which drew him to study the exclusion zone.

There is no official heritage listing for Chernobyl and as the clean-up continues Mr Maxwell fears the story captured by the dormant city will be dismantled and lost.

In April Mr Maxwell will travel to Kyoto, Japan, where he will present his world-first research on Chernobyl to the World Archaeological Congress.

While there he is planning to take a trip to Fukushima, where he hopes to be the first archaeologist to study the post-meltdown landscape of the 2011 Fukushima nuclear disaster.

Describing his willingness to venture into areas most people run away from, Mr Maxwell said: ‘This kind of archaeology is an exciting field to be a part of.

‘Unlike other archaeologies, contemporary archaeology has an immediate and direct effect on living communities.

‘It is the footprint of our shared recent history and for that reason it is a part of me in a very real way.’