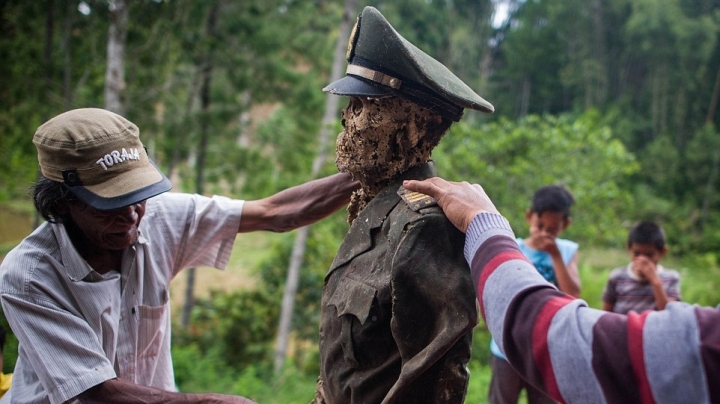 You look like death warmed up! Indonesian villagers dig up their ancestors every three years and dress them in new clothes in ancient ritual to show 'love and respect'

The Torajan people of Indonesia proudly display their dead relatives after digging them up and dressing them in new clothes in an ancient ritual that is meant to show respect for their late loved ones, DailyMail infroms.

Every three years, the tribe from Sulawesi island exhume their dead, who they wash and dress in fresh clothes and then pose for family photographs in a festival known as Ma'nene.

The ritual, which translates as 'The Ceremony of Cleaning Corpses,' has been going for more than a century.

One of the most important events in the lives of the Torajan people, an ethnic group indigenous to the mountainous region of Tana Toraja, is the funeral.

Most save money their entire lives so they can have a respectable burial for themselves or family members.

In some cases the deceased's funeral is held several weeks or even years after their death so the family have can have time to save up and pay for an extravagant funeral.