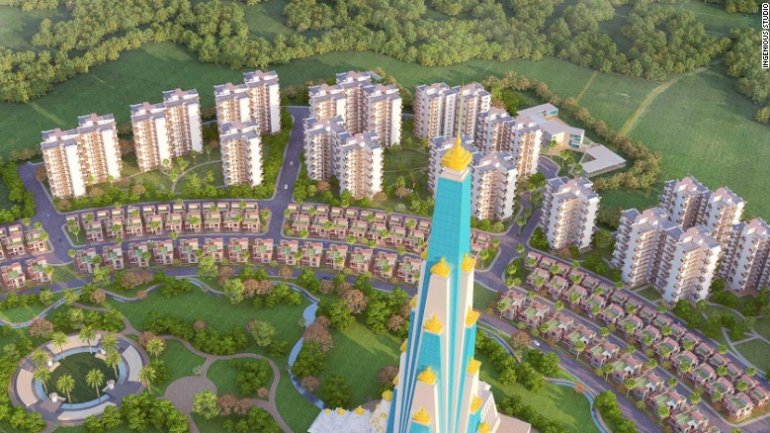 Work is underway on the world's tallest religious skyscraper: a 700-foot-tall Hindu temple in India.

Vrindavan Chandrodaya Mandir in Uttar Pradesh will be bigger than Vatican City's St Peter's Basilica and rise higher than Ulm Minster when completed, says CNN according to The Spaces.

Indian practice InGenious Studio and structural consultant Thornton Tomasetti have designed the temple-cum-cultural center, which includes a theme park, for the International Society for Krishna Consciousness.

The earthquake-proof building's tiered silhouette is reminiscent of a rocket ship, rising 70 stories in the air.

"Attractions planned in the theme park would be like park rides, animatronics, light, sound and special effects as well as the Vraja Mandal parikrama shows and laser shows," says Narasimha Das, project director of the temple.

A capsule elevator will run through the height of the structure, whisking visitors up to a viewing deck. The ride doubles as a light and sound experience, taking people through the planetary systems of the universe, as laid out in Vedic literature.

Dedicated to Hindu deity Lord Sri Krishna - who, according to scripture, is said to have grown up in Vrindavan - the temple will be surrounded by around 30 acres of forest, planted to recreate the twelve forests of Braj.

Social facilities will skirt the temple as well as apartments and villas, which the New Indian Express reports will be sold to fund the project. It will also be financed by donations from devotees.

Right now, work is concentrated on the building's 180-foot-deep foundations.

"(These) will have 511 columns, which will be completed by March next year," confirms Das.
AFLĂ imediat Știrile Publika.MD. Intră pe Telegram