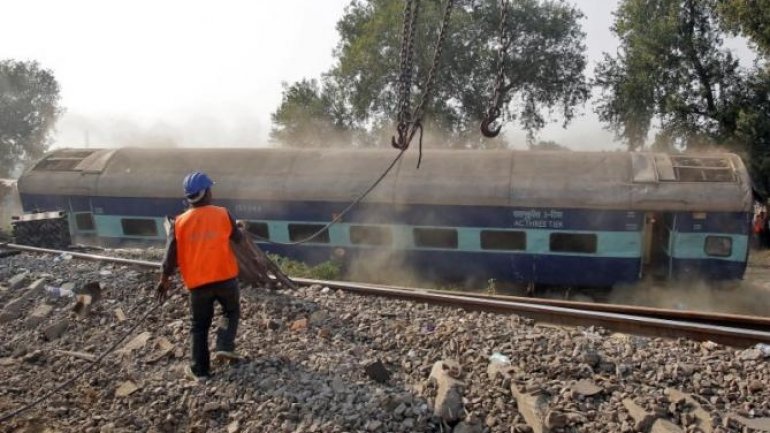 The track where an Indian train derailed on Sunday, killing 150 people, was inspected just two days earlier and found to be in good condition, raising more questions about the safety of a network seeking $17 billion in funding to prevent more crashes.

The derailment, among India's worst train tragedies, was a stark reminder of the dilapidated condition of the vast state-run railways and of the challenge Prime Minister Narendra Modi faces in fulfilling his promise to modernize them.

Officials believe a rail fracture may have sent 14 carriages crumpling into each other as most of the 1,700-odd passengers on board slept. But they cannot be sure until each section of damaged track is analyzed.

"This was an accident where all of the rails were uprooted and broken. It's very complicated," Mohammad Jamshed, a senior railways ministry official, told Reuters.

With people regularly clinging precariously to the outside of carriages or crammed on the roof, it is groaning under growing demand and decades of underinvestment.

Modi, who has a deep attachment to the railways having started out selling tea at a station, last year announced a record 8.5 trillion rupees ($124 billion) five-year investment plan to bring the network into the 21st century.

The government has focused on building new lines at crunch points and expanding the network into remote areas, and says it has nearly doubled the amount spent on safety.

Accidents, however, are rising, with 80 reported this financial year to Nov. 15 from 69 during the same period last year.

India recorded 27,581 railway deaths in 2014, the most recent year for which figures are available, with most victims falling from, or being struck by, moving trains.

"The railways need a new approach to looking at safety. They are getting stretched by the new lines and capacity increases," G. Raghuram, a railways expert at the Indian Institute of Management, Ahmedabad, said.

The request repeats one made in early 2016 by Railway Minister Suresh Prabhu that the finance ministry rejected on the grounds that the railways had already been allocated record funds for investment.

"In light of the tragedy, we are hoping they can help," the senior official said, speaking on condition of anonymity.

Fares are highly subsided to help poor people travel, and money earned from freight is used to fund passenger services.

But that has meant that more than 90 percent of the railways revenues are spent on operating costs, leaving little for its own investment.

A railways spokesman said the last inspection of the crash line in Pukhrayan in Uttar Pradesh state was completed on Nov. 18 by a manned engine traveling slowly over the rails.

Gang men who walk the country's 110,000 km of tracks daily also inspected it.

Rail fractures develop when a small crack grows and are caused when excess weight is pressed on to the tracks. Poor maintenance and a big variation in daily temperatures, common in northern India's winter, can exacerbate the fractures.

The railways have started to use modern floor detection systems - common in other countries - to scan for tiny fractures, but it owns too few for regular use across the network.

The train's outdated carriages, which are not strong enough to withstand a major accident without crumpling, are of a type that accounts for 92 percent of the network's 63,000 coaches.

That, say officials, added to the toll of Sunday's accident, in which close to 200 people were also injured.

Newer carriages using German technology are reinforced with stainless steel and have anti-climbing features that stop carriages piling on top of each other during a derailment.

The railways ministry said this week it would stop production of the older model by 2019, but with a lifetime of 25 years and limited resources, many of those coaches will remain in service for years to come.