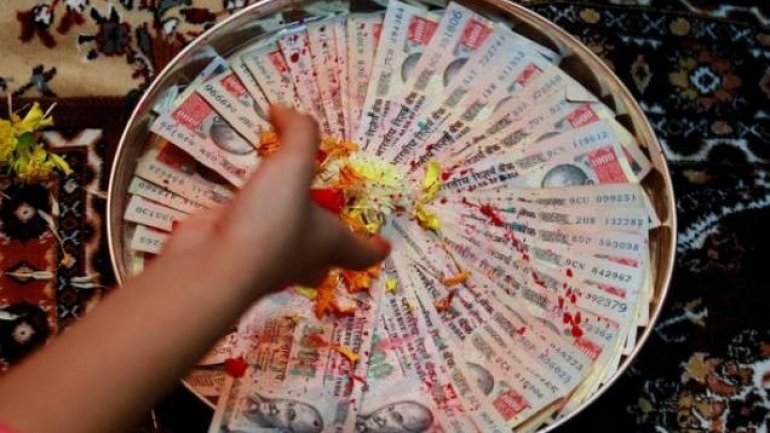 India’s prime minister, Narendra Modi, has announced that 500 and 1,000 rupee notes are to be taken out of circulation, in a move expected to plunge the the country’s economy into chaos, reports The Guardian.

In a surprise televised address on Tuesday night, Modi said the demonetization of India’s highest-value banknotes, worth about £6 and £12, would start from midnight.

The move is an effort to close down the booming economy of untaxed cash transactions, which allows corruption, the funding of terrorist groups, and keeps counterfeit notes in circulation.

Addressing the nation, Modi said: “The exchange of 500 and 1,000 rupee notes being tendered as currency will be stopped from today. Black marketeers and traitors who use black money will not be able to move large amounts of money and 500 and 1,000 rupee notes will become worthless pieces of paper. Those citizens earning honestly and with hard work, their interests will be protected.”

Modi emphasised that citizens who had 500 and 1,000 rupee notes need not panic, as cash could be deposited at banks or post offices until the end of 2016. He said: “These steps are a part of our battle against corruption, black money and counterfeit notes. The ordinary citizen who is struggling, will be strengthened … There is no need for you to rush to the bank tomorrow, you have 50 days.”

Modi’s announcement is controversial in India, where a huge parallel economy accounts for 20% of GDP and operates with near impunity. The move will anger corrupt politicians, including in Modi’s own Bhartiya Janata party, who accept cash bribes.

Banks and ATMs will be closed on Wednesday. High-value notes would still be accepted in hospitals or in case of an emergency situation until the new year, the prime minister said.

The move is also part of Modi’s efforts to crack down on tax evasion. Under the government’s income disclosure scheme, which ended in September, holders of undeclared income and assets were given an amnesty from criminal charges in exchange for voluntarily coming forward and paying 45% tax and a penalty. In August the government passed the goods and services bill, which brought India’s 1.25 billion-strong population into a single market for the first time, and amalgamated various state taxes into a single, all-encompassing tax.

With this announcement, Modi is bolstering his reputation as a leader who has fought corruption and strengthened the economy. He said: “When [the BJP] was elected in 2014, there was discussion among the Bric [Brazil, Russia, India and China] nations, that the ‘I’ among the Brics was wobbling. But India is now a star, a bright spot and that is a claim made not by us, but by the IMF and the World Bank.”