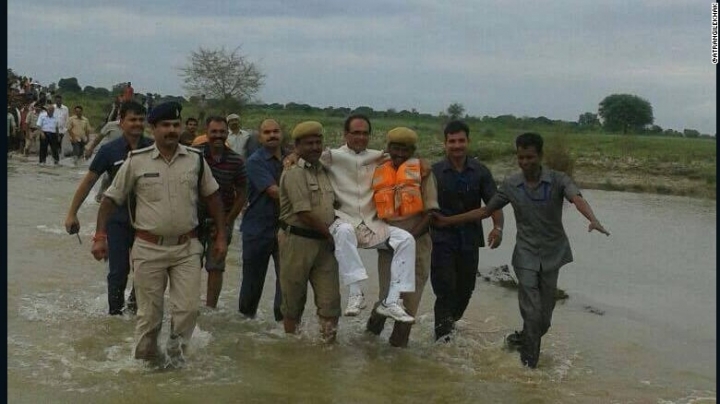 A photo of an Indian minister -- decked out in crisp white slacks while being carried through flood waters -- has sparked intense ridicule on social media, CNN reports.

Shivraj Singh Chouhan, the Chief Minister of the state of Madhya Pradesh in central India, was visiting flood-affected areas to review and support rescue missions when he decided against wading through ankle-deep waters.

Instead, police officials carried him through the flooded areas while his large entourage trailed behind. Chouhan's office told local India media that police officers carried the Chief Minister to avoid him from getting hurt.

Heavy rainfall and flooding across eastern and central Indian states have displaced ten of thousands.
The worst hit states are Bihar, in east India, Uttar Pradesh in the north, and Madhya Pradesh, with at least 53 dead in these states, officials said. More than 2 million people have been affected by the flooding.

"#OPJaisha could have died, lack of water #ShivrajSinghChouhan cud not walk through water lest his Rin ki safedi Shoes & trousers get dirty," @arpitasriv tweeted.

Another suggested that Chouhan's actions reflected badly on India.
"India is a third-world country because we elected third-class, uncouth leaders! #ShivrajSinghChouhan," @VoiceOfRamOrg tweeted.