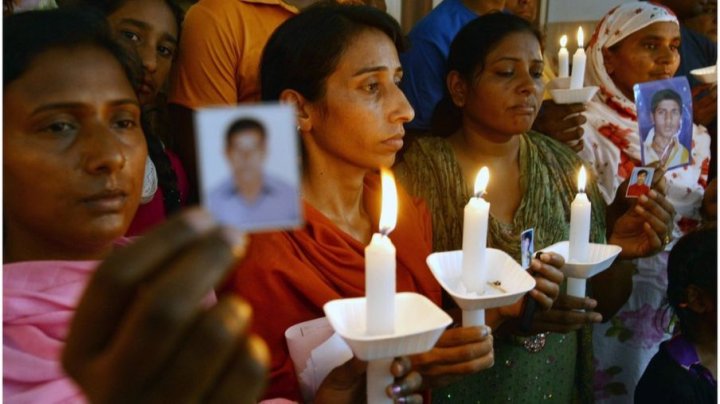 India says 39 of its citizens who were kidnapped by Islamic State in Iraq in 2014 have been confirmed dead after remains recovered from a mass grave outside Mosul were DNA tested.

The Indian external affairs minister, Sushma Swaraj, told parliament that tests had shown a match with the construction workers, who disappeared in June 2014 when the city fell to Isis.

“With full proof I can say these 39 are dead,” Swaraj said on Tuesday.

India had maintained that at least some of the hostages could still be alive – contrary to the testimony of one survivor – and had said it would not announce their deaths without concrete evidence.

Swaraj said ID cards, long hair and the kada bracelets traditionally worn by Sikh men were recovered from the grave of the workers, who mostly hailed from Punjab state.

The bodies were found near Badush, a village about 10km from the construction site where the men were snatched. Isis has been accused of executing at least 500 inmates from a prison in the same area in June 2014.

One of the workers, Harjit Masih, managed to escape the massacre, returning to India in 2015 and telling a news website that he and his colleagues were taken to Badush four days after their kidnapping and gunned down.

He claimed to have only been grazed by a bullet and to have escaped to the Kurdish-controlled city of Erbil. He also said the workers had been in phone contact with their families and the Indian embassy in Baghdad in the days before their execution.

But Swaraj has consistently disputed his account of the hostages’ deaths and said on Tuesday that Masih had escaped from Iraq by posing as a Muslim from Bangladesh.

In a press conference later on Tuesday, she defended the delay in confirming the mens’ deaths despite of mounting evidence they had been executed. “It would have been a sin had we handed over anybody’s body claiming it to be those of our people, just for the sake of closing files,” she said.

“Shattered at the heart-wrenching news ... that the 39 Indians missing in Iraq, most of whom were Punjabis, are dead,” the Punjab chief minister, Amarinder Singh, tweeted. “My heart goes out to the families who had been living in hope since their reported abduction by Isis in 2014. Prayers with all of them.”

Shashi Tharoor, a member of the opposition Congress party, accused the government of “giving false hope to the nation” by refusing to confirm the mens’ deaths before this week. “That was disappointing behaviour,” he said.