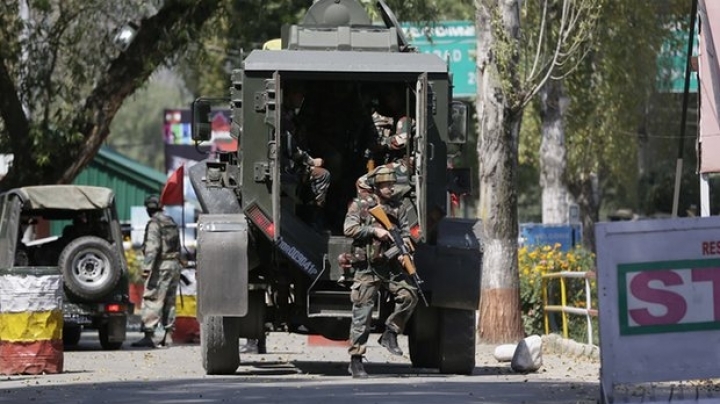 India has directly accused Pakistan of involvement in a deadly raid on a Kashmir army base that killed 17 soldiers, labelling its neighbour “a terrorist state”, reports The Guardian.

Sunday morning’s attack on the army camp near the disputed border with Pakistan was among the deadliest against security forces in Kashmir history, and sparked grief and anger across India.

The death toll could yet grow, with about 35 soldiers injured, some critically.

Four fedayeen – highly trained militants on what are essentially suicide missions – died in the three-hour assault on the base at Uri, near the militarised “line of control” that divides Indian Kashmir from the Pakistan-controlled side.

The Indian army’s director of general military operations (DGMO) said none of the four men was from the Indian side and that some of their equipment had Pakistani markings.

It claimed they were members of Jaish-e-Mohammed, a militant group alleged to have links to elements within the Pakistani government.

About 13 or 14 of the soldiers died in fires started by the militants’ incendiary ammunition, which consumed the temporary shelters and tents in which they had been sleeping. A rotation of units was under way, meaning more soldiers had been stationed on the base than usual, the DGMO said.

Rajnath Singh, the Indian home minister, cancelled an overseas trip and held an emergency meeting on Sunday afternoon with top security officials. In a series of tweets, he accused Pakistan of responsibility for the attack.

Condemning the “cowardly” attack, the Indian prime minister, Narendra Modi, said he could “assure the nation that those behind this despicable attack will not go unpunished”.

India’s president, Pranab Mukherjee, said the country would not be cowed by the attack.

Former army officials and members of Modi’s own party called for a more bellicose response than the largely diplomatic routes pursued after the 2008 terrorist attacks in Mumbai or a January attack on a Punjab army base that killed seven.

No group has claimed responsibility for the assault and Pakistan has denied any involvement. Pakistan’s foreign ministry spokesman, Nafees Zakaria, told Reuters: “India immediately puts blame on Pakistan without doing any investigation. We reject this.”

Hostility between the nuclear neighbours was already high after a summer of violent clashes in Kashmir between security forces, protesters seeking greater autonomy or independence, and militants India accuses of being sponsored by Pakistan.