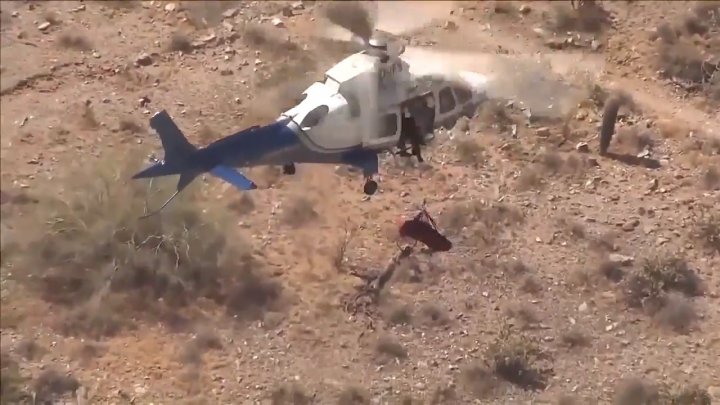 A botched helicopter rescue of a hiker from a mountain in Arizona has resulted in the injured 74-year-old woman being spun round at high speed while strapped to a stretcher as she was being winched up into the aircraft.

The incident, which has been captured on film, shows the aircraft crew attempting to winch the woman up into the helicopter.

She had reportedly suffered a head injury from a fall while hiking on Piestewa Peak - the second highest point in the Phoenix mountains - on Tuesday morning, writes Independent.

As the stretcher nears the belly of the aircraft, it begins to rotate faster and faster until it is a whirling blur.

The winch is then lowered somewhat, and the speed of the spin falls, but as they again try to pull up the stretcher the spin goes to an even higher rate.

Shelley Jameson, assistant chief of the Phoenix Fire Department, told Fox News: “We carry out mountain rescues all of the time, but this one gathered quite a bit of attention because during the rescue she was packaged on a hoist in a stokes basket and it started to spin.”

Phoenix Police Air Unit lead pilot Paul Apolinar said: “We were doing a hoist rescue, we do a lot of them. It was a normal rescue. Sometimes when we bring the helicopter up from the ground, it will start to spin, so we have a line attached to the basket to help prevent that. Today it didn’t.

"The basket started to spin. It’s something that’s a known phenomenon in the hoist rescue industry - we train for it. So we did a couple of procedures to help stop it and mitigate it."

Derek Giesel who was the pilot in command of the operation added: “This has happened in the past but it’s been quite a while. We’ve learned some of the techniques to get rid of it and one of them, which you can probably see in the video is to lower the load, and it does start to stop, but then we brought it back up and it gets into the same downwash from the aircraft and started to spin again.”

He eventually flew forwards and the spin stopped, allowing crew to pull the stretcher into the helicopter.

He said the helicopter had been called out because she had taken a “ground-level fall” and had “some facial and head injuries, also there were some reports she had an altered level of consciousness, feeling dizzy and unable to walk anymore.”