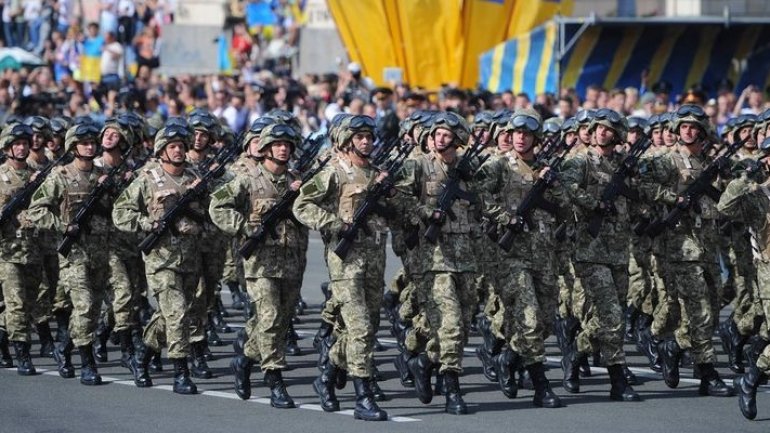 Thursday, August 24, on the occasion of the 26th anniversary of the proclamation of independence of Ukraine in the center of Kiev will be held military parade.

It will be made by the President of Ukraine Petro Poroshenko, which plans to lay flowers at the monuments to Taras Shevchenko and Mykhailo Hrushevsky.

The parade will start at 10.00. As part of the front payments and banner groups in the parade will be attended by 231 soldier from 10 foreign States, in particular, 9 countries that are members of NATO.

This year the parade will pass without a solemn passage of military equipment . However, at Khreshchatyk, between Maidan Nezalezhnosti and European square, an exhibition of new and modernized weapons and military equipment on which the 70 samples.

Guests of the parade will be 9 Ministers of defense of foreign countries. In particular, to participate in the celebrations and official meetings with the first persons of the Ukrainian state in Kiev there has arrived the Minister of defence of the USA James Mattis. The parade will also be participating in the Georgian military, headed by defense Minister Levan Izoria.

At 21.00 on the square of Independence to a great classical concert with the participation of the National presidential orchestra and the orchestra of the airborne troops of the United States. During the concert will sound Ukrainian, American and European hits in the joint performance of orchestras.