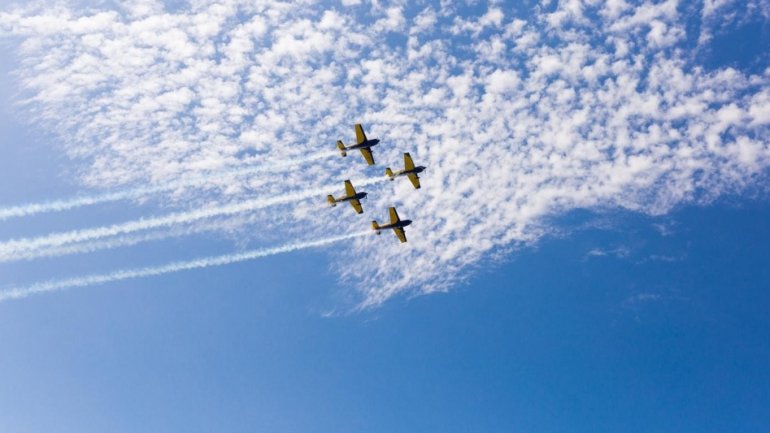 For Independence Day, thousand of citizens from Orhei enjoyed an avian show. The authorities of the city also offered free sausages, the stall having throughout the day a long waiting line. Both for the locals, as well as those who decided to join the celebration various events were organized. This evening at 10 PM a firework show awaits the guests.

The planes belonging to an avian club from Romania made a great show in the skies of Orhei. The celebration begun with a National Parade. People marched on the main Street of Orhei, being led by their Mayor, his wife Jasmin and their two children. The mood only improved with Orhei's traditional dance "Haiduci". The good mood was maintained by the performance of various singers and orchestras.

After the concert, many people gathered to taste some of the free sausages:

"They are very tasty. Thank you very much. We hope next year's celebration will be the same".

"They are both great and tasty. Its crowded, but we have to make it work somehow".

Cooks declared that around 10 thousand sausages were prepared.

The main street was decorated in traditional elements. Surprises awaited even kids. Various workshops were opened where the little ones could handcraft jewelry.

Local people admitted to be amazed by the event's diversity.

"May God bless Ilan Sor with health, along with his children. I'm impressed. Thank you. I bow to  Ilan Sor".

Mayor Ilan Sor admitted that he actively participated in the organization of the events.

"Whenever there is an occasion in our city, I join its organization. I like to know what's going on. Hate surprises. I want to constantly know what's happening, but more importantly to know that our people will like it" the Mayor declared.

Orhei will have a grand concert of local singers, among whom will perform Carla's Dreams. The stage will also be taken by the Mayor and his wife, Jasmin. The day will end with a firework show.

While Rascani had a bit of an unusual celebration, organizing a raffle.

Bags filled with onions, apples, peas, pepper and sunflower seeds. As well as television, bicycles and mopeds were being given away.

Those willing to participate purchased tickets ahead of time, some lucky enough to go home with prises worth between 50 and 20 thousand lei: "I am going to use this prize. Will take the bag to the mill and then use it as food for the chickens".

A man left with a bag full of apples: "Stay healthy Iura! Make some alcohol out of it and invite us for a drink".

This woman won a bag of flour:

"I will bake pastry out of it. Everything that flour can be used for".

"Congratulation on wining this prise. May it come of use in your house".

"Thank you, mister President, for this idea, for those gifts".

Citizens of Rascani gathered for one big traditional dance, to taste some of the offered food, but also to find out more about the area they live in. This year, each village showed their best: traditional clothes, food and dances inherited from their ancestors.

"We came today to showcase the food from our village, because we are an Ukrainian village and we wish to promote our food and culture" Constantin Macovei, Mayor of the Nihoreni village, Rascani said.

"We prepared some traditional food and exhibitions" Victor Garbuz, Mayor of the Parjota village, Rascani declared.

"We wanted to show that our village has skillful craftsmen. They work in the church and create sacred images and portraits. As well as handmade table covers" Virgil Molosag, Mayor of Sangureni village, Rascani stated.

Citizens of Rascani congratulated Moldova with its big day and said why it was important:

"It's Independence Day. The day when our soul is at ease and we are truly happy with what is happening in our country".

"It's a day when we can be proud of our country".

"I wish to everybody health, prosperity and luck".

"We wish to everyone happiness and to become part of the European Union".