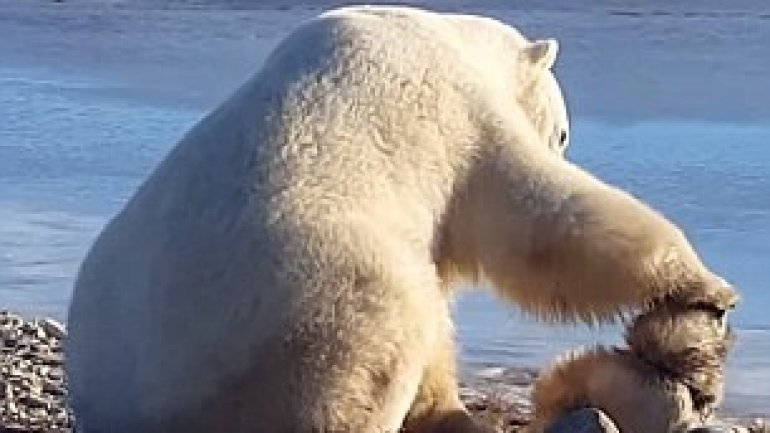 This is the adorable - and extraordinary - moment a wild polar bear pets a chained-up sled dog in the Canadian wilds.

Polar bears weigh 330-990 lbs and can easily kill a dog, especially one on a chain. But this footage, shot by David De Meulles of Manitoba, shows the bear gently stroking the placid animal on the head, shows Daily Mail.

'I had no idea what was going to happen, and then sure enough he started petting that dog, acted like he was a friend,' De Meulles told CBC. I just so happened to catch a video of a lifetime.

De Meulles was taking tourists to see polar bears when they came across the dogs, chained up on the property of local man Brian Ladoon.

Ladoon breeds the rare sled dogs, which are impervious to the cold - and clearly fearless too.

'I've known the bears to have somewhat friendly behavior with the dogs, but for a bear to pet like a human would pet a dog is just mind-blowing,' De Meulles said.

'It was a beautiful sight to see, and I just can't believe an animal that big would show that kind of heart toward another animal.'

Ladoon told CBC that the dogs, which are bred for the cold, see the chilly area as a 'paradise' and are rarely troubled by predators, save the occasional attack by wolves.

There have been 'scares' with polar bears, he says, but the 'primitive and fearless' dogs keep the nasty bears in their place.

And, it seems, reward the nice ones with a little playtime.