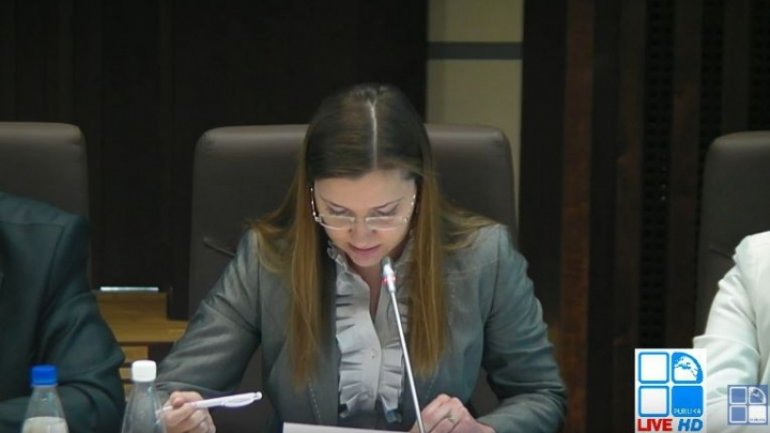 Over one hundred persons, among which members of the Central Electoral Commission, of the Ministry of Justice and of the Constitutional Court, but also representatives of the civil society participate to discussions.

Rodica Secrieru, secretary CC explained the difference between the mandate’s withdrawal and revoking.

“There are conceptually omitted important details. I want make public another Decision of the Constitutional Court, which is ignored in this context, but is also the most relevant to this subject”.

We’re talking about the Decision regarding the interpretation of articles 68 paragraph(1), (2) and 69 paragraph (2) of the Constitution.

I will make public paragraph 34 of the Constitution, where the Court says that, in its vision, the mandate of parliamentarian expresses his/her relation with the entire people being in the service with it, not solely with the voters who elected him/her, even if these benefit of the presence of the parliamentarian in the virtue of his/her obligation to keep connection with the electors. Thus, the syntagm "to be in the service of the people " from article 68 paragraph (1) of the Constitution means that, since the moment of the election and till the mandate’s termination, every deputy becomes the representative of the people in its integrity and has as mission to serve the common interest, the one of the people and not solely the one of the party from which originated, paraphrasing, not just of the electors who elected him/her.

The Court said in paragraph 43, regarding the possibility of revoking of the mandate of deputy: "Thus, because the parliamentaries aren’t representatives of a fraction of the population, they can’t be the defenders of some peculiar interests, they are absolutely free in the exercising of their mandate and don’t have the obligation to accomplish the commitments that they could have assumed themselves before the election or the eventual instructions from the behalf of the electors, formulated during the mandate. “The electors don’t have the legal obligation to sustain their party or the decisions of their group within the Parliament”.

Paragraph 44: "The Court states that, in the logic of free representation, the mandate of the parliamentarian is irrevocable: the electors can’t make it stop prematurely and the practice of the dismissals in white is forbidden. The electors can’t, as a result, express their dissatisfaction in what concerns the way in which an elected accomplished his/her mission but through the refusal of the granting of their votes when he/she asks the re-election".

Paragraph 46: "The Court observes that the civil mandate, invoqued by the authors of the interference, is of private law, with a content resulted from the express agreement or allege of the parties and with imperative character, reported solely to the mandate’s wish. In contrast to this, the parliamentarian mandate is of public right, which is the result of the parliamentary elections (elective basis), with a pre-established content and with representative character of the entire electoral body (people)".

There are also other paragraphs relevant for this topic. The distinction between the mandate’s withdrawal and the revoking is important to be made. The revoking cannot be presented in no way of forced withdrawal, as stipulated in the Constitution.

The distinction between the revoking by the people and the forced withdrawal is necessary to be made. These are established grounds.

Rodica Secrieru, secretary of CC declared that the mayors, the president, the governor, are executive authorities that musn’t be with legislative authority, supreme representative of the people.

Approximately 80% of the Moldovans want the introduction of uninominal voting, and in the diaspora this percentage is even higher. reminds PUBLIKA.MD  in a poll realized by company Intellect Group. The project regarding uninominal voting was sent for notice to the Commission from Venice.

Vladimir Plahotniuc, the president of PDM declared that for the outlining and elaboration of the initiative forwarded to the Parliament, the practice of several countries as USA, Great Britain or France, with advanced democracies, in what concerns the implementation of uninominal voting was studied very carefully.

It is to be specified that uninominal voting is a type of voting mentioned in the electoral systems’ legislation practiced in USA and Great Britain. This type of voting represents the way of direct electing of some individual candidates, opposed to the system of election drafted on lists by the parties from a state’s political life.

For the parliamentarian elections there will be created 101 uninominal circumscriptions, and from each there will be elected one deputy. In their sustaining, the candidates must collect at least one thousand signatures, but not more than teo thousand. Representatives in the Parliament could be elected by the diaspora.

The uninominal circumscriptions abroad will be formed that will participate to voting. The deputies could be dismissed by local referendum organized in the circumscription where they were elected. There won’t be possible their dismissal in the first and last year of mandate.