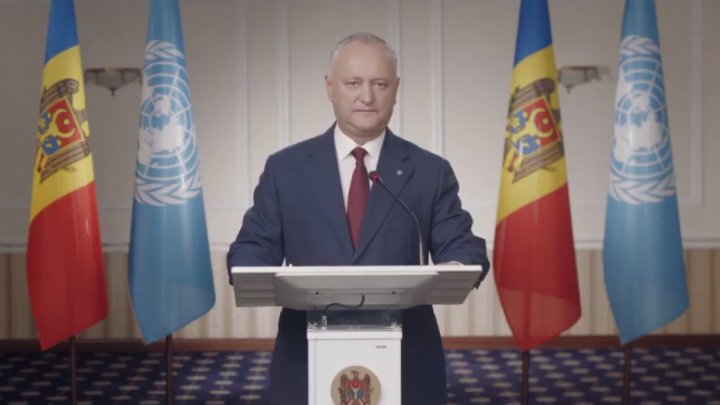 The Republic of Moldova fully supports the collective effort to achieve the objectives set out in the UN Anniversary Declaration and is committed to contribute to the common response to the major challenges, which the UN and the international community are facing. President Igor Dodon made this statement at the meeting of the UN General Assembly to celebrate the 75th anniversary of the United Nations.

At the same time, the head of state mentioned that the 75th anniversary of the UN, overshadowed by the effects of the COVID-19 pandemic, is an opportunity for heads of state and government to become aware of past shortcomings and agree on constructive cooperation in the future.

In his speech, Igor Dodon also stated that the Declaration of Celebration of the 75th Anniversary of the United Nations represents the outcome of solid negotiations between states.

"We all have agreed on an ambitious roadmap towards our common future.

A future that means a planet protected in real terms, not just in a declarative manner.

A future, in which the peace will become the supreme value, conflicts being prevented, possibly resolved at their initial phase.

In our common future, no one will be left behind, the international law will be complied with and continuously developed, and national governing institutions will enjoy the full confidence of the citizens."

The Moldovan head of state also said that the year 2020 will remain in the history of the humanity as the year full of significant events – a year of re-evaluation of the contemporary world system and strengthening of our common efforts to overcome global challenges.

You can see the full speech of the president HERE.