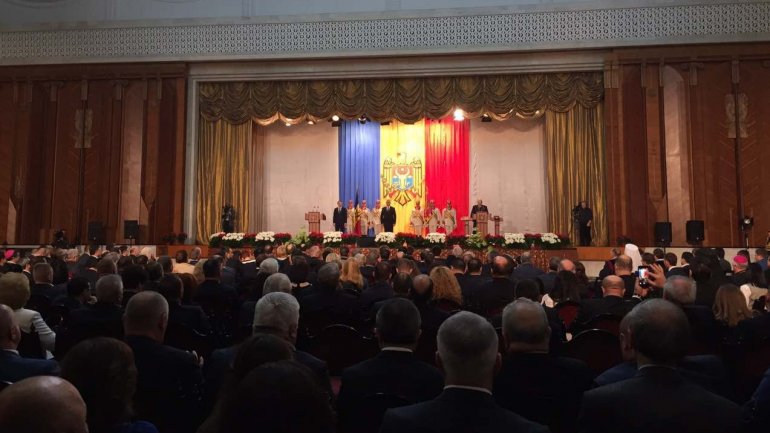 Igor Dodon today was sworn in as president of the country. He was sworn in at the Palace of Republic, in front of hundreds of guests, including diplomats, people of art, politicians, famous people in the country and abroad.

"I swear to devote all my strength and skill to the advancement of Moldova. To respect the Constitution and laws of the country", said the President Igor Dodon.

The Presidential Collar and was handed over by Victor Popa, interim president of the Constitutional Court. This is because Tanase is on leave. Collar will be worn at special events. It is gilded and costs 140,000 lei.

Igor Dodon said he would promote a foreign policy on partnership and friendship with all countries.

"We will intensify relations with our neighboring states, Romania and Ukraine. We will develop a multidimensional collaboration with the European Union. I gladly accepted the invitation to pay a visit as head of state in Brussels and I hope that it will take place in the first months of 2017. We will make bridges towards both east and west" said the President Igor Dodon.

Igor Dodon came to the inauguration ceremony with his family. Before the ceremony, he gave a speech before supporters who were waiting in front of the Palace of the Republic. He called for unity and urged to abandon the barricades.

While some people came to support Dodon, others protested against his inauguration.

"Both those who voted for me and those who did not vote, we all want what's best for our country. Let us descend from the barricades. We let personal and geopolitical ambitions, political statements. And go forward to ensure the future of our country" said the President Igor Dodon.

"I came here to rejoice. I congratulate Igor Dodon. I hope that it will be better. Even though I am old, still I came to support him. I hope that there will be changes in the country."

"He is the exponent of Russia. Will not happen anything to Dodon. We'll wait and see. We will convince ourselves that he does not express the interests of all residents of Moldova."

Inauguration ceremony lasted about half an hour, after which Igor Dodon, accompanied by Parliament Speaker and Prime Minister laid flowers at the monument of Stephen the Great.

There he was expected by dozens of protesters from a union organization.