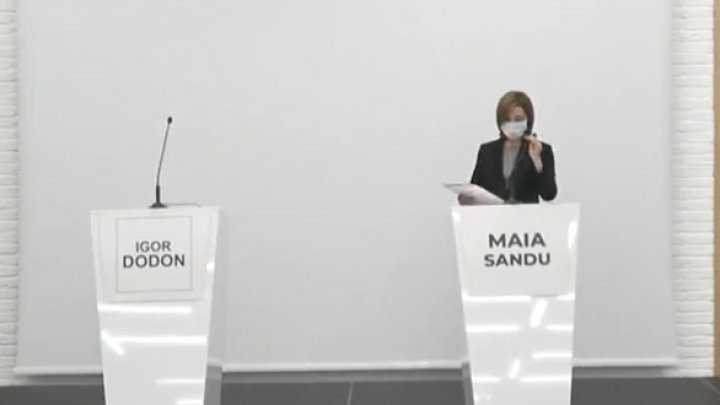 The independent candidate in the presidential election, Igor Dodon, did not accept the invitation of his opponent, Maia Sandu, to participate in electoral debates.

Sandu mentioned that this is not the first time that Igor Dodon has not accepted the invitations to participate in the debates. According to the PAS leader, Igor Dodon also ignores the meetings with the voters and goes only where, "citizens are brought organized, where people are selected, scared and who are ordered not to ask awkward questions."

Maia Sandu read the questions, which she would have liked to ask Igor Dodon if she had come to the debates.

"I would have asked him why he did not make any visit to the countries where serious investments come from in the Republic of Moldova," said Sandu, mentioning Italy, Romania, Great Britain, Poland, France and the USA.

"How is it that a president in four years has not even made time for an official visit to countries that are trading partners? (...) What did he do when several private sector companies were attacked by criminals, when they were suffocated by abusive controls and to ask him how prices have risen and if he understands what prices mean more for poor people ", pointed the PAS candidate for presidential Maia Sandu.

She mentioned that she did not find an answer to these questions in the report made from public money and presented today by Igor Dodon's advisers.