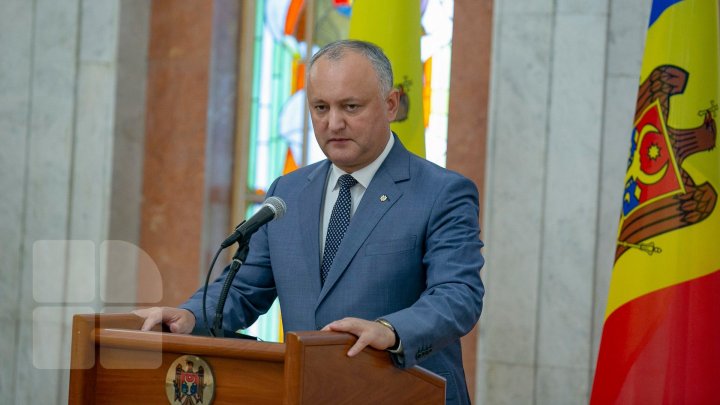 The president Igor Dodon doesn't represent country's interests, he only executes Moscow's demands. This is the opinion of several leaders of political parties and non-governmental organizations, who commented on the statement of the head of state on strong autonomy for the Transdniestrian region. They believe that Dodon is promoting the federalization idea.

'They are exactly the same principles enshrined in the 'Kozak plan', federalization, only that they have redefined it again. Discussions, on the one hand we see, they go with the Russian Federation. One of the safeguards are present for the coalitions, namely 'solving the Transdniestrian problem', based on the request that are coming from Moscow', mentioned Valeriu Munteanu, USB president.

'The Russian-European coalition, which has set up in June, opens up dangerous ways for antinational solutions to the Transnistrian dispute. Whether the solutions can be designed or are called 'strong autonomies', they still contain federalization intentions', concluded Vitalia Pavlicenco, PNL president.

Also, public associations leaders claim that the plan regarding the granting of an enlarged autonomous authority for the Transdniestrian region is illegal.

'These very dangerous intentions are fueling the separatism in Transnistria and are falling under the Criminal Code. I think Dodon is not interested in the citizens of the Republic of Moldova. Any of his intention represent Russian Federation', explained Vlad Bilețchi, president of the 'UNIREA-ODIP' Association.

In his turn, the president of the Democratic Party of Moldova, Pavel Filip, considers that Igor Dodon's intentions and must be presented in wide public detail.

'This should be coordinated with our citizens, such an important decision must not be taken by a single person, especially if this decision is taken outside the Republic of Moldova', said Pavel Filip.

Meantime, in a public analysis on the website Ukraina.ru, analyst Miroslav Voitenko warns that allocating strong autonomy for the Transdniestrian region, the Moscow plan sets a precedent for Ukraine. More specifically, it is about conflict settlement between neighboring countries.

Recently, Russian Foreign Minister Sergey Lavrov said that Moscow is committed to restoring the principles of the Kozak plan, when talking about solutions to the Transnistrian conflict resolution. A new version of the plan was recently promoted by the informal PSRM leader, president Igor Dodon.

The federalization or splitting of the country was one of Dodon's conditions during the negotiations on the formation of a coalition between PDM - PSRM. Thereafter, the head of state insisted that the phrase 'federalization' to be replaced by 'special status'. But the plan was rejected by Democrats. Former leader of the PDM, Vlad Plahotniuc, told that he will never sell his country and accused Dodon of Homeland betrayal.

Therefore, PSRM has allied with PAS and PPDA.