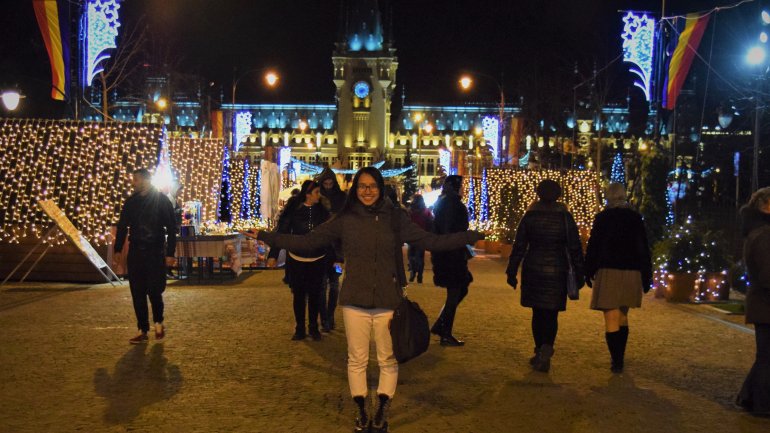 "...Forever the traveler and the wanderer, I always found Iaşi to be a restful place to stop by (...).There was, in this royal city, enveloped in the melancholy of unbearably grand memories, more wit and more worship of all things intellectual than in any other Romanian centre..."

Iasi on Christmas day seems to be as splendid as a fairy that has taken off the autumn coat, with cool and fresh breath spreading into the air.

Madalina, a local couchsurfer picked me up from the train station. She asked me with a smile which could even brighten the darkest soul:

We set off the night city discovery.

Despite reaching over 600 years of age, Iasi is always described young, active city. Known as the second-largest university centre in Romania after Cluj Napoca, the city intrigues Erasmus Mundus students with its sense of peace and tranquillity, its romance and magnificence, especially at nighttime.

-It’s Christmas, everybody left the city to their home towns or simply are gathering at their houses to celebrate with family. That’s why it’s less crowded on streets and in public transports.

Walking on garbageless street, Madalina introduced me her city. She said she liked Iasi because this place accommodates over 60,000 students in 5 public universities, she liked Mundus students and their diverse zeitgeists which make the city multicultural and international. “Dynamic but peaceful, modern but traditional, royal but rebellious” are characteristics of this Moldavian Capital.

Winter flavors permeated us through sweet Christmas songs, through aroma of street food or everlasting giggle of the children in Christmas Fair on pedestrian street in front of Culture Palace.

Children, the next generation of the country are always taken care of. Right at that moment there was a group of first class pupils from nearby village led by their teacher, on the way to Palas Mall to visit the Santa Claus. Their eyes sparkled with excitement and hopes within Carol melody played by young vocals.

Known as the Cultural Capital of Romania, Iași is a symbol in Romanian history and Palace of Culture plays as a true historical symbol of the past. Hardly does nobody mention about Iasi without admiring this monumental edifice. Unfortunately, my visit was on Christmas when the Palace was closed on vacation program, I missed the chance to observe the building interior. The edifice stood supercilious at night with lights on its body, incandescent as a Queen.

How to talk about a city without ticking off its folks? In Vietnamese literature, we have a poem “Khi ta ở chỉ là nơi đất ở, khi ta đi đất bỗng hóa tâm hồn” which is similar to a quote in the novel Night train to Lisbon by Pascal Mercier:

“We leave something of ourselves behind when we leave a place, we stay there, even though we go away. And there are things in us that we can find again only by going back there.”

We left behind our soul pieces and life stories shared without hesitation which made our night and made our Iasi. That happened when we approached an old man sitting on the bench, asking him for a picture but everything ended up a novel narrated fluently in detail, the story of his life. That’s Iasi, that’s why people like this city, when everyone has their own stories and feel free to share with others, perhaps a story about daughters of an old man went abroad and left him alone in the country, or a debate regarding politics and national issues right on the bench. We felt close to the locals and we immediately forgot our nationalities. Who are we? We are human being surviving on the same Earth. We immersed ourselves in those stories and naturally started ours. When people are willing to share their opinions, they are likely to accept the difference. This generosity and open-mindedness heartened us and made the most memorable night of mine in Romania.

Madalina and I left the city center, got on the tram and went to her apartment. However, something still echoed in my head “Our lives are rivers, gliding free to that unfathomed, boundless sea, the silent grave!"