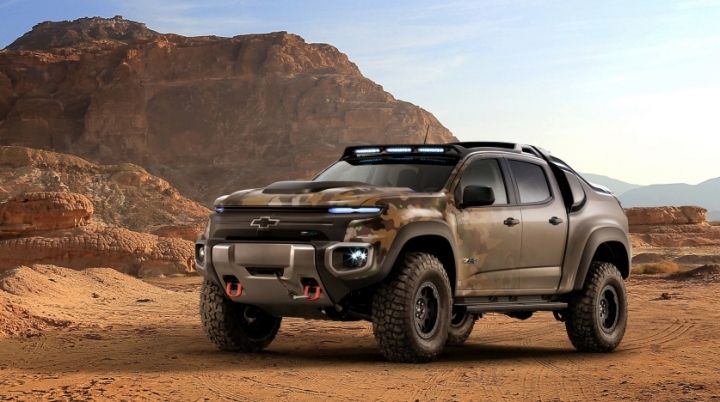 The U.S. Army will spend the next year pushing the vehicle to its limits.

Diesel-powered Humvees have long been the workhorses of the U.S. Army—noisy, fossil-fuel dependent vehicles that have lost a lot of their off-road capabilities due to heavy armor added to make them more resilient to attacks.

But their dominance could be challenged by a futuristic take on the Chevrolet Colorado that’s powered by hydrogen fuel cells, is nearly silent, and even produces water.

The Chevrolet Colorado ZH2, developed by General Motors U.S. Army Tank Automotive Research, Development and Engineering Center (TARDEC), is an extreme off-road-capable fuel-cell-powered electric vehicle. The demonstration vehicle was revealed this week at the fall meeting of the Association of the United States Army.

The Army is going to spend the next year putting the vehicle through extensive and extreme field testing.
The 3-ton vehicle, which is based on Chevrolet’s midsize pickup, is intimidating with its 37-inch tires, reinforced body, and standing at more than 6.5 feet tall and more than seven feet wide. But its the hydrogen fuel cells—and all the benefits that come with that system—that makes it a potential game-changer.

Read more at The Fortune.