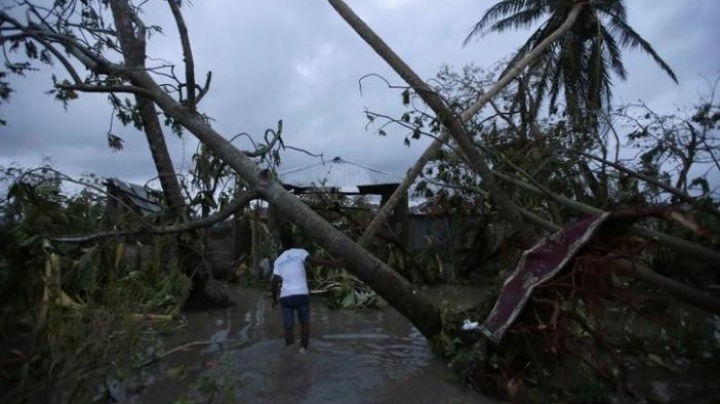 Matthew, the first major hurricane threatening a direct hit on the United States in more than 10 years, lashed Florida on Friday with heavy rains and winds after killing at least 339 people in Haiti on its destructive march north through the Caribbean, reports Reuters.

Although the hurricane was downgraded to a Category 3 storm as it approached the U.S. mainland, winds gusts of up to 113 kph and heavy downpours were still reported across coastal communities in Florida, the National Hurricane Center said in an advisory.

More than 140,000 Florida households were without power, according to Governor Rick Scott. In West Palm Beach, once lit street lights and houses went dark and Interstate 95 was empty as the storm rolled through the community of 100,000 people.

Matthew's winds had dropped on Thursday night and into Friday morning, downgrading it to a Category 3 on the five-step Saffir-Simpson scale of hurricane intensity, where it could either plow inland or tear along the Atlantic coast through Friday night, the Miami-based center said.

Few storms with winds as powerful as Matthew's have struck Florida, and the NHC warned of "potentially disastrous impacts." The U.S. National Weather Service said the storm could be the most powerful to strike northeast Florida in 118 years.

Hurricane conditions were expected in parts of Florida on Friday and a dangerous storm surge was expected to reach up to 3.35 meters along the Florida coast, Ed Rappaport, deputy director of the Miami-based NHC, said on CNN.

Damage and potential casualties in the Bahamas were still unclear as the storm passed near the capital, Nassau, on Thursday and then out over the western end of Grand Bahama Island.

The last major hurricane, classified as a storm bearing sustained winds of more than 177 kph, to make landfall on U.S. shores was Hurricane Wilma in 2005.

NASA and the U.S. Air Force, which operate the nation’s primary space launch site at Cape Canaveral, have already taken steps to safeguard personnel and equipment.

A team of 116 employees was bunkered down inside Kennedy Space Center's Launch Control Center to ride out the hurricane.

Roads in Florida, Georgia and North and South Carolina were jammed, and gas stations and food stores ran out of supplies as the storm approached early on Thursday.

Those three states as well as North Carolina declared states of emergency, empowering their governors to mobilize the National Guard.

President Barack Obama called the governors of the four states on Thursday to discuss preparations for the storm. He declared a state of emergency in Florida and South Carolina, a move that authorized federal agencies to coordinate disaster relief efforts. Late Thursday, Obama declared an emergency in Georgia and ordered federal aid to the state.