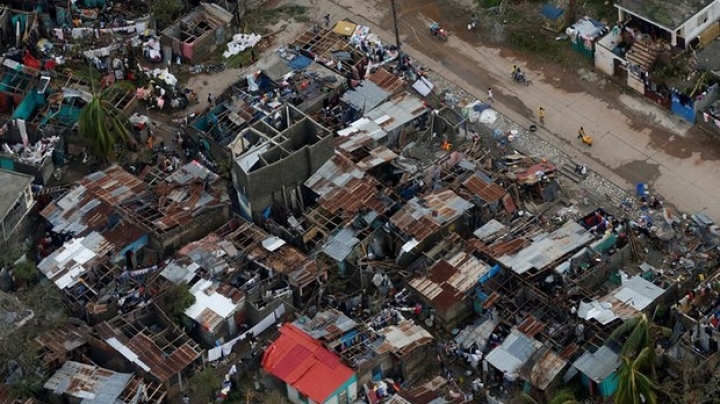 The number of people killed in Haiti by the devastating effects of Hurricane Matthew has risen to 136, local officials said on Thursday, as rescue workers and aid agencies hoped to begin reaching remote areas of the country to assess the damage, The Guardian reports.

The hurricane, which hit Haiti on Tuesday, brought 145mph winds and torrential rains that have destroyed more than 3,200 homes, displaced 15,000 people, ruined plantations and drowned animals.

Efforts to access the worst-affected areas – including the Grand’Anse and Sud departments – have been hampered by flooding, the collapse of communications networks and the destruction of a key bridge.

But as the weather clears, Haitian authorities, the UN and national and international non-governmental organisations are starting to get a better idea of the scale of the destruction. The airport in the capital, Port-au-Prince, has reopened for humanitarian flights and two portable satellites are being used to restore communications with cut-off areas.

Officials in Haiti on Thursday raised the death toll to 98. At least four other people elsewhere are known to have died as a result of the hurricane.

Marie Alta Jean-Baptiste, the head of the country’s civil protection directorate, warned the death toll was likely to rise as emergency workers reached the stricken regions.

“We do know there’s a lot of damage in the Grand’Anse, and we also know human life has been lost there,” she told the Associated Press.

The port city of Les Cayes in Sud is also feared to have suffered badly in the storm.

“The situation in Les Cayes is catastrophic, the city is flooded, you have trees lying in different places and you can barely move around,” its deputy mayor, Claudette Regis Delerme, told Reuters.

The UN has described the hurricane as Haiti’s worst humanitarian crisis since the devastating earthquake six years ago. The rains and flooding have prompted fears of a surge in the cholera epidemic that has killed almost 10,000 people since the disease was accidentally introduced to Haiti by UN peacekeepers.