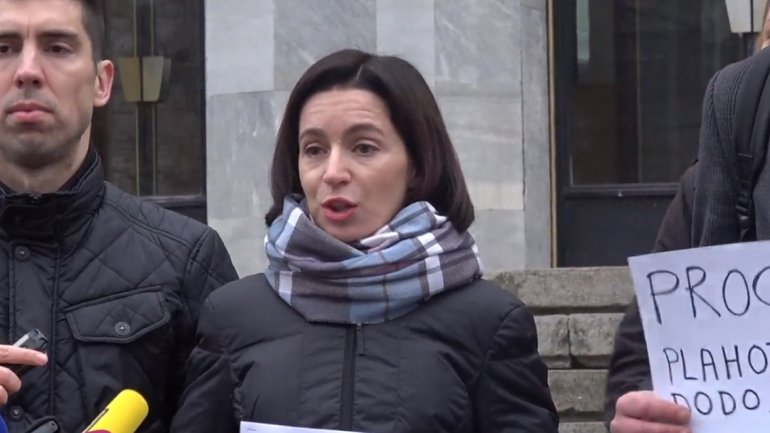 She came to protest, only to become target of critics. Leader of PAS, Maia Sandu, accompanied by a few supporters has protested against the criminal file opened on Ilan Șor, who is accused of scam and money laundering. About 200 people came to defend the mayor of Orhei, who suggested that they speak less and act more for the people.

At the end of June, judges have sentenced Ilan Șor to seven years and six months behind bars, for scam and money laundering from BEM, Banca Socială and Unibank. The court has freed him from house arrest until the final decision, while the file is at Chisinau Court.

"What the judge said is that Șor has not taken the money. The judge has decided that Șor will be freed, but under judiciary control, without being at least under house arrest" Maia Sandu declared.

"Buiucani Court is dragging out Ilan Șor's file, where the final decision must be made" a protester said.

Șor's supporters, who were ten times more, believe that PAS's leader should act more for the people.

"This person has done a few thing for us....What has Ms. Sandu done? She only knows to open her mouth? How to make promises? Schools were closed, everything was closed! Now what? Let's go after Șor?" another protester said.

"Unlike her Șor helps us, all she does is stand aside and badmouths everyone. We can see how Vlad Plahotniuc is working. Let Maia Sandu do something for the people" a protester declared.

"Has this woman done at least something for this country? She only did flash-mobs, announcements and facebook. It is everything she does! We will not allow such a person to speak badly of our leader" Vice President of ȘOR party, Marina Tauber declared.

During the protests, a man proposed to Maia Sansu. Leader of PAS has not accepted to marry and accused the flowers of being bought from money Ilan Șor stole. Later, the man was chased aways by PAS's general secretary,  Igor Grosu.