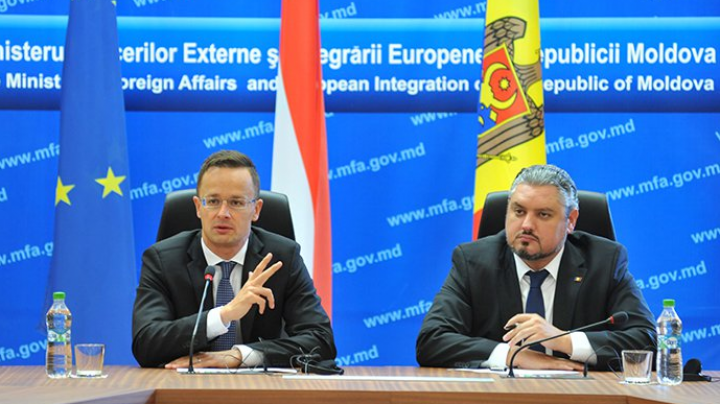 Hungary will back Moldova in continuing the European integration. Hungarian Minister of Foreign Affairs and Trade Péter Szijjartó made the statement after a today’s meeting with head of Moldovan diplomacy Andrei Galbur, Moldpres informs.

Péter Szijjartó said Hungary was a strong supporter of Moldova’s integration into EU. “We are glad that the roadmap on priority actions for implementing the EU-Moldova Association Agreement has been carried out by 90 per cent. Hungary will further back the cooperation relations with Moldova, especially, in pharmaceutical, agricultural and economic sectors by creating a credit line amounting to 61 million euros, meant for boosting the trade relations between enterprises from Hungary and economic agents from Moldova,” he said.

For his part, Foreign and European Integration Minister Andrei Galbur said “fulfillment of roadmap proves that the government and parliament are able to mobilize in a more difficult stage. Subsequently, we will focus on practical implementation of all items seen in the roadmap, and on the basis of the results, the European partners will provide support and assistance,” Galbur said.