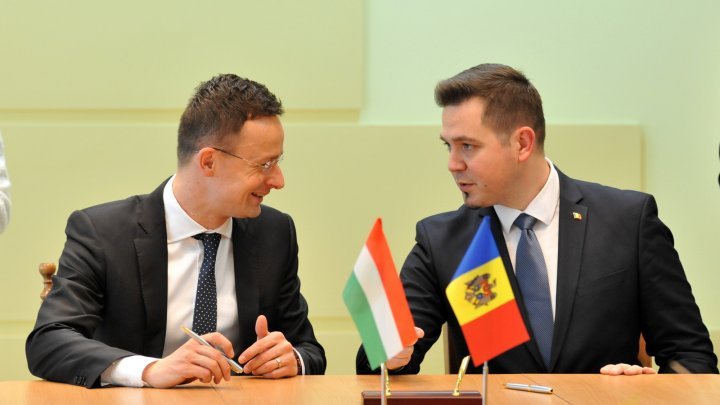 The issues of Moldovan-Hungarian cooperation in the political, economic, environmental, cultural, as well as the collaboration within the international organizations were discussed today in Chisinau by the Minister of Foreign Affairs and European Integration, Tudor Ulianovschi, with his Hungarian counterpart, Péter Szijjártó, in a official visit to our country.

In the course of the dialogue, Ministers Tudor Ulianovschi and Péter Szijjártó addressed a wide range of topics on the relations between the two countries in different areas, welcoming the positive dynamics of the recent political and diplomatic dialogue.

The heads of diplomats of the two states exchanged views on the regional situation and the latest developments in the process of settling the Transnistrian conflict.

Minister Ulianovschi expressed gratitude to the Hungarian government for the support given to Moldova in the process of European integration and the promotion and implementation of the modernization objectives, according to the provisions of the Moldova - EU Association Agreement.

In this context, Minister Ulianovschi stressed that "Moldova appreciates the recent Joint Statement of the official meeting of the presidents of the Visegrád Group parliament, adopted in Budapest, which urges the EU to provide a credible prospect for countries wishing to join the European Union. "

Head of Moldovan Diplomacy mentioned the interest of Moldova in expanding bilateral relations with Hungary on the commercial-economic segment, particularly by organizing the next meeting of the Intergovernmental Commission in Chisinau, which will allow the initiation of new investment projects involving the business environment of both states, diversification of trade, etc.

In this context, Tudor Ulianovschi said that free trade agreements with both the EU and the CIS states will enable Moldova to become a bridge between the West and the East or other regions of the world.

Hungarian Foreign and Trade Minister Péter Szijjártó emphasized the opening of the Budapest authorities to intensify bilateral relations with Moldova on all dimensions and to support the efforts of the Chisinau authorities in the process of European integration, implementation of reforms, etc. .

In this context, the head of the Hungarian diplomacy said the country supports Moldova's granting of macro-financial assistance to Moldova and will opt for the enlargement of the EU to include our country along with the Western Balkan states in the list of potential members.

Referring to the political processes in Moldova, Minister Péter Szijjártó mentioned that each sovereign state alone sets out its guidelines for development, modernization and reformation, taking into account the national interest and its citizens, including also the electoral system.

The interlocutors exchanged views on the current status of the Transnistrian conflict settlement process, the regional situation, the relations with the neighboring countries, etc.

The document constitutes a legal framework for Moldovan-Hungarian cooperation in the field of nature protection, biological diversity, animal species and their habitats, reducing air pollution.

The document also provides for cooperation in the field of the Moldova's legislation harmonization on the protection of the environment and the nature of the European Union regulations, the implementation of the EU Strategy for the Danube Region, the reduction of greenhouse gas emissions and the adaptation to climate change, etc.