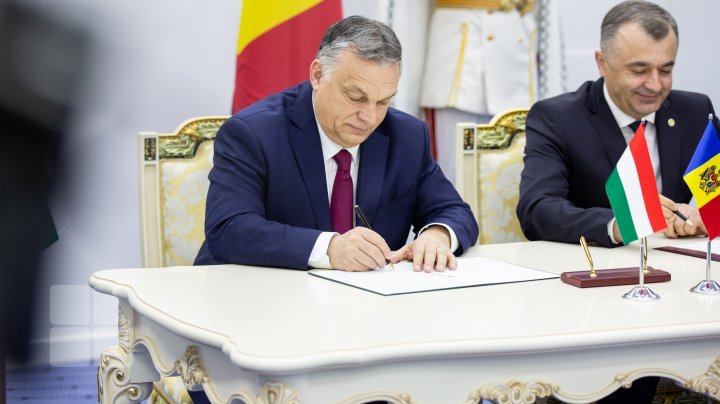 The declaration considers the European Union membership of Hungary and the objective of Moldova's European integration and the importance of intensifying political and multidimensional dialogue between countries.

The primary objective of the Partnership is to expand and deepen bilateral cooperation and support the Moldovan effort of European integration.

The bilateral meetings chaired by the premiers will focus on diverse topics such as security, economy, trade, energy, transport, agriculture, tourism, health, science and others. Governments will undertake joint actions aimed at supporting Moldova's progress in the process of European integration.

The partnership involves supporting and extending the activity of the Joint Intergovernmental Commission for Economic Development Moldova - Hungary. The Prime Ministers agreed to elaborate Action Plans, meant to determine the progress on the commitments undertaken and to evaluate their achievements annually.

PM Ion Chicu thanked Prime Minister Orbán for the visit and for the support provided to Moldova. It was mentioned that the Government of Moldova expects the signing of the Strategic Partnership to boost the economic exchanges between Moldova and Hungary, creating new relations between the businessmen from both states.

Prime Minister Viktor Orbán said that Hungary openly supports Moldova's intentions of European integration and will share all the experience gained as a member state. It has been mentioned that it is not simple to defend national interests within the EU, but it is better to be in the Union than outside it.