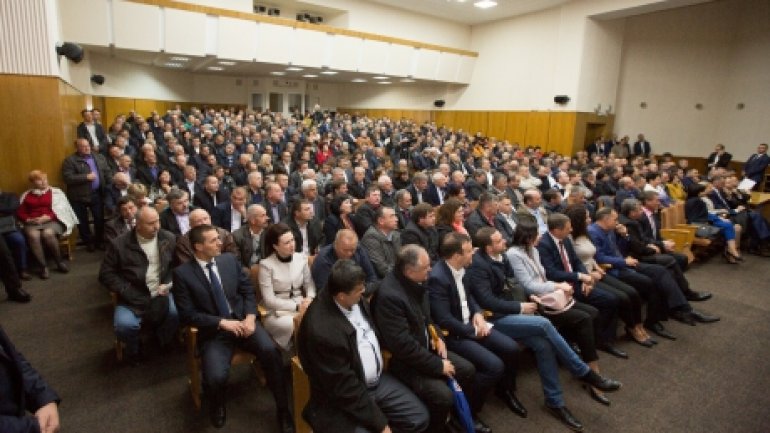 "Moldova needs a patriot president who will be close to people, experienced and involved, a peacemaker. The only one candidate who meets these qualities is Marian Lupu". The message was made by 400 mayors from across the country who expressed their full support for the Democratic nominee.

"Marian Lupu is the president that Moldova needs; he worked in several public functions, he has the necessary experience in administration, promotes balance and stability. Makes us confident that he will maintain effective dialogue between all links of power, will support a strong economy for Moldova, with protected families. Is a convinced pro-European and will lead us where it is worth to come - the great family of the European Union" , said the Mayor of Ungheni, Alexandru Ambros after the meeting with locals.

"The mayors have said a firm Yes to a candidate who knows how to listen, to work and solve people's problems. The support was expresed for nearly half of all mayors of  Moldova, the force that has a say ", was the message od Edinet village mayor, Constantin Cojocaru.

"I'm glad there are many of us Today, we have a request for citizens - to give a vote of confidence to Marian Lupu, the PDM candidate in the elections of October 30th. He has al the required qualities of a leader of the country that will work for the good of the people ", said Hincesti village mayor, Alexandru Botnari.

Marian Lupu thanked the mayors for the support and confidence that they have granted and I ensured that, from the position of President of the country, receiving a mandate from the voters, he will work closely with local officials to solve people's problems. "We have received the support of a large team, with hardworking and responsible people. It's a very important support because people are elected directly by the people. I will establish a special communication relationship with municipalities and local communities and treat the topics with attention and care. All the people's issues are important and should be targeted by the head of state, in order to find solutions" , said Marian Lupu.

The Parliament Speaker Andrian Candu and Prime Minister Pavel Filip were present at the meeting with the mayors, and , through their messages, reiterated the importance of ensuring a good cooperation between all institutions of state power, to maintain the correct course of development and modernization of Moldova.