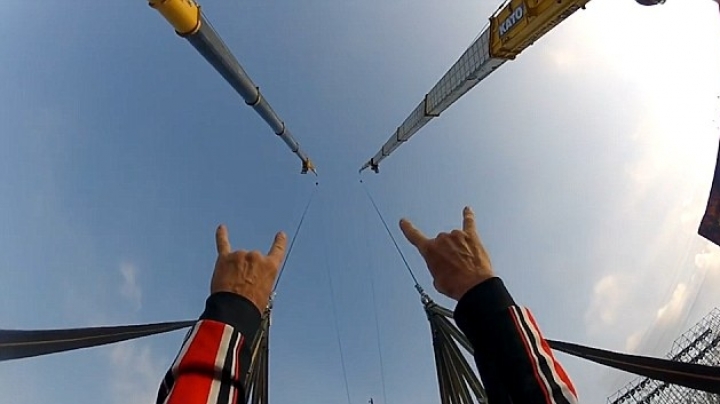 In a rather terrifying video two human catapults travel from 0-200kmph in just a single second as they are fired through the air from a slingshot the size of a skyscraper, reports Daily Mail.

World-renowned BASE jumpers Chris Douggs McDougall and Jimmy Pouchert took on the extreme challenge in the sky above Dubai.

After a 3-2-1 countdown he is launched through the air at a breathtaking speed.

In the first second he takes on over 6Gs, and reaches a height of 300 feet.

After twisting and turning it is astonishing the jumper is able to pull his parachute in time and land safely on the ground.

The video was posted on YouTube on 29 June by Negative4Productions, who wrote that the stunt was carried out with help from Go Fast Energy and Skydive Dubai.

Replying to one comment questioning the safety of the stunt, the video uploader wrote that everything was well planned out.

The production company posted: 'There are many techniques these guys practiced to counter the intense G force. In addition, because of their horizontal position, the blood rushed to the back of their head instead of out their head (had they been positioned upright), hence lowering their chances of passing out.'