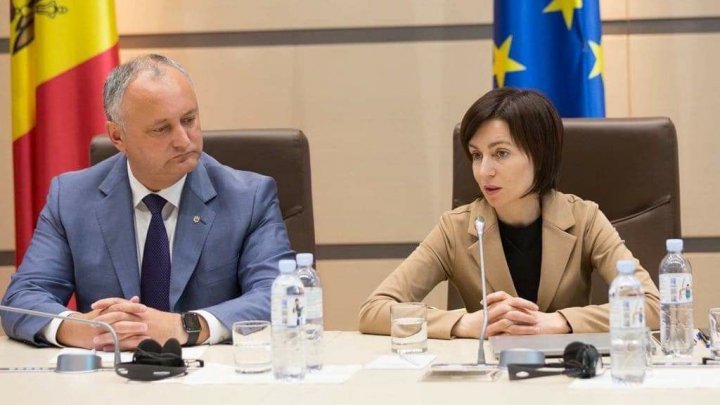 Russia gradually takes over Moldova, supported by one of its openly devoted politicians, Moldovan President Igor Dodon, under the kindly eye of PM Maia Sandu, who apparently is aware and possibly consents to that political conspiracy or maybe even supports it, despite her pro-EU commitments.

One of the latest events which can point to this scenario is the visit of Russian Defense Minister Sergey Shoygu. At the invitation of President Dodon, he will attend the events of August 24 dedicated to the 75th celebration of "liberation from fascism" (as the Soviet Union named the historical events), along with a delegation of over 30 people.

Around 10 persons from the security staff of the Russian Minister have already arrived in Moldova, other 17 are expected to come today, and the last 15 people will land together with Shoygu on Saturday. On the other hand, the visit must solve a serious issue: Mr Shoygu is prohibited in EU as persona non grata, so that he could not travel via Romania. And it's most likely that Ukraine will also ban his travel. Under these circumstances, Kremlin and president Dodon must show their creativity. Or maybe only take PR benefits of a fresh staged costume drama, similar to the previous intended visit to Moldova of Mr Rogozin, another banned Russian official.

PM Sandu only found out this visit from President Dodon on Monday, the official said. However, she added that it was long ago scheduled for the end of August. But this would not diminish the fact that Russia carefully plans its moves.

Moreover, Sandu insisted not signing any permission for the Russians'visit due to insufficient procedures taken regarding this visit, which surprised the Moldovan Defense Minister Pavel Voicu.

In addition to this suspicious visit, pro-Russian Dodon managed to help Russia control Moldova by politicizing the key state institutions during these two and half months. After successfully forming the parliamentary majority with the political alliance Blocul ACUM, led by Sandu and Andrei Nastase, Dodon simply placed his people at the lead of these fundamental institutions.

Vladimir Țurcan, the new CC President, was a Communist deputy when Moldova belonged to the USSR. He became the Ambassador in Russia and remains a Kremlin admirer. Dodon handed power to Țurcan, a politician with anti-Romania and anti-NATO policies, increasingly sparkling heated political debates in Chisinau.

The ruling coalition voted Zinaida Greceanîi as Parliament Speaker. She is a party colleague with Igor Dodon (PSRM, The Socialist Party from The Republic of Moldova) and an ex-PM during communist Vladimir Voronin's presidency (7 April 2001 - 11 September 2009). Greceanîi was noted for her anti-Romanian attitude manifested in 2009, when she expelled the Romanian ambassador for unfounded alleged involvement in the Chisinau uprising. In the same year, she practically closed the border over the Prut.

Immediately after the new coalition took power, Zinaida Greceanîi's first official visit abroad was to Moscow, where she gave a speech at the Parliament. Moreover, a significant delegation of the Moldovan Parliament, which also included pro-European MP's, has visited the Russian Duma.

It should be noted that when appointing as prime minister, she stated that she speaks the "Moldovan" language, and not the Romanian language. This is a long lasting controversy, since the constitutional name of the states's official language is "Moldovan", but the scientific name, as acknowledged by the Moldovan Academy Of Science is "Romanian", based on the common origin of the population that lives on both banks of the Prut river, the actual border between Moldova and Romania. The constitutional name is favored by the so called "statalists" and by the openly pro-Russian moldovans, both groups rejecting anything connected with the neighboring Romania. Added to geopolitical and ethnic issues, the language controversy is used by the Russian propaganda to keep divisions within the Moldovan society.

He is a close person to pro-Russian President Igor Dodon. While being the head of Bender Police Inspectorate, he even joined Dodon in the trip to Mount Athos, a most famous Orthodox holy place, in Greece.

Ruslan Flocea is one of Igor Dodon's closest collaborators. He was a counselor to President Dodon, then Secretary General of the Moldovan President's Office. Now he's the CNA director.

Victor Gaiciuc, appointed by Dodon as secretary of the institution, is close to President Dodon, according to Adevărul.

Chisinau press even remarked him with his scandalous statements. While he was the President of Union of Officers, in a conference at the Academy of Sciences of Moldova in 2016, Gaiciuc said that "the example of Donbas is worthy of all admiration", considering that pro-Russian separatists in the region managed to oppose the Ukrainian army. Russia is the staunch supporter of the separatist army in Donbas. Previously, Gaiciuc was also Defense Minister and Moldova's ambassador to the Benelux countries.

Alexandru Esaulenco is the new director of the SIS, and Artur Gumeniuc is the new deputy director. Esaulenco's approval as director was coordinated with President Igor Dodon.
As for Artur Gumeniuc, he had been a close collaborator of Dodon. Before being appointed to SIS, he co-opted in 2017 in Dodon's team as adviser in the field of national defense and security.
Under such circumstances, Moldova got back under Kremlin's almost total control, since the "so called pro-European allies of Dodon's Socialist Party" (as named by Vladimir Putin himself) don't seem to have tried to prevent any of this. Maia Sandu and her colleague Andrei Nastase marched under the "state liberation from oligarchic captivity" slogan but led Moldova right into Russia's captivity. Again.
loading...
AFLĂ imediat Știrile Publika.MD. Intră pe Telegram