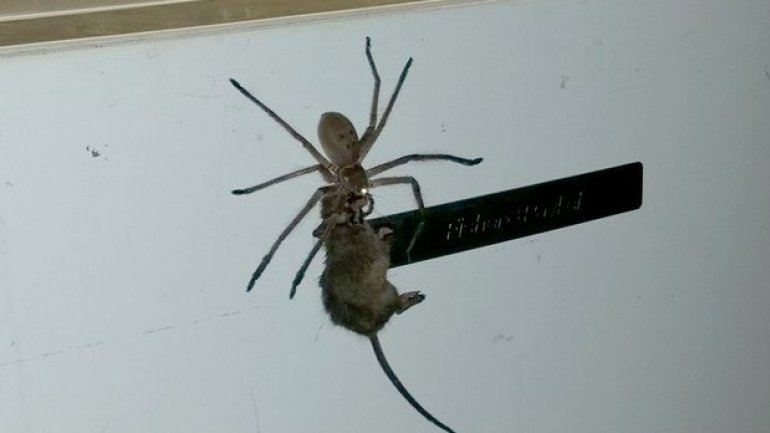 Australia’s litany of fearsome fauna seems to have a new entry. Added to deadly snakes, man-eating crocodiles and poisonous jellyfish comes Hermie the hunstman, a spider so unusually large and strong that it had no problem carrying a sizeable mouse up the outside of a fridge.

Hermie’s feat was captured on film by Jason Wormal, a tradesman from Coppabella in Queensland, who was heading out to work in the early hours of Monday morning when he says he received an offer from a neighbour that he couldn’t refuse.

“So I am just about to leave for work about 0030 and me neighbour says ‘You want to see something cool’ and I say ‘Hell yeah’, he wrote on Facebook.

“So we proceed to his place and he shows me this. Huntsman trying to eat a mouse.”

On the video shot by Wormal a voice can be heard off screen wondering in amazement: “What’s he gonna do with him? Man that is so cool”.

Stills taken of the spider seem to show the arachnid clutching the mouse by its head with its mandibles while it scurries up the fridge.

The footage quickly circulated online and by Monday afternoon had been viewed more than 6.5m times.

Among the 41,000 comments below the original post were many expressing deep horror at the strength of the spider. Anthony Candelaria Sanchez summed up the general feeling with the simple statement: “Oh hell no.”