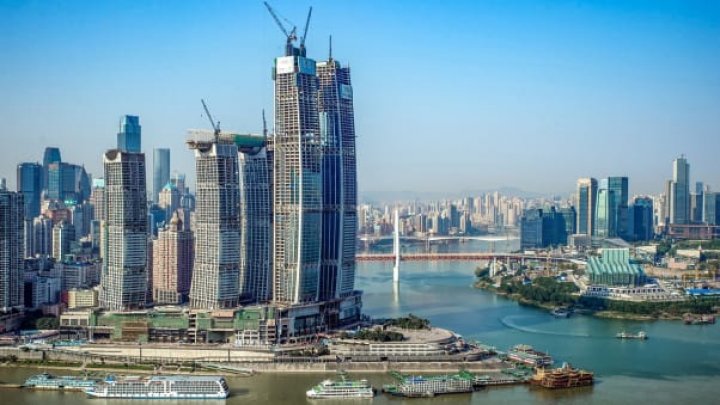 Dubbed an engineering marvel, the highly anticipated Raffles City Chongqing project in China is nearly complete.
Devised by world-renowned architect Moshe Safdie, it measures a staggering 1.12-million-square-meters and consists of a collection of eight towers and a gigantic connecting skybridge, which is being called a "horizontal skyscraper."
The 250-meter-long skybridge, named Crystal, is said to be one of the world's highest.
When open, it will have a viewing gallery, sky gardens, an infinity pool and various restaurants.
If that wasn't enough, the skybridge also transforms into a giant light beam at night time, illuminating the sky with a rousing light show.
The Raffles City Chongqing complex will also include a 230,000-square-meter shopping mall, 1,400 residential apartments, a luxury hotel and 160,000 square meters of lavish office space.

A futuristic nod to Chongqing's past

The eighth and final skyscraper of the $3.8 billion megastructure was recently topped out, meaning Raffles City Chongqing is on course to open this year.
The design was inspired by traditional Chinese sailing vessels, a nod to Chongqing's past as a trading center.
The ambitious development is located in the center of the southwestern Chinese city, facing the intersection of the Yangtze and Jialing rivers.
Developer CapitaLand, one of Asia's largest real estate companies, has announced it's now focusing on the structure's elaborate interior, with completion intended for the second quarter of 2019.

According to Lucas Loh, deputy CEO and CIO of CapitaLand China, trees are being transported over to "enliven the skybridge," which will apparently feature the tallest observation deck in western China.
"After six years of construction using state of the art engineering technologies, we are proud to present in Raffles City Chongqing an iconic architectural form resembling a powerful sail surging forward on the historic Chaotianmen site," Loh said in a statement.
"Positioned as a must-visit destination for local residents as well as domestic and overseas travelers, Raffles City Chongqing has been garnering strong response from our customers."
Occupying 9.2 hectares of site area, Raffles City Chongqing is CapitaLand's eighth Raffles City development in China.
The others are in Beijing, Chengdu, Hangzhou, Ningbo, Shenzhen and Shanghai, which has two.
AFLĂ imediat Știrile Publika.MD. Intră pe Telegram