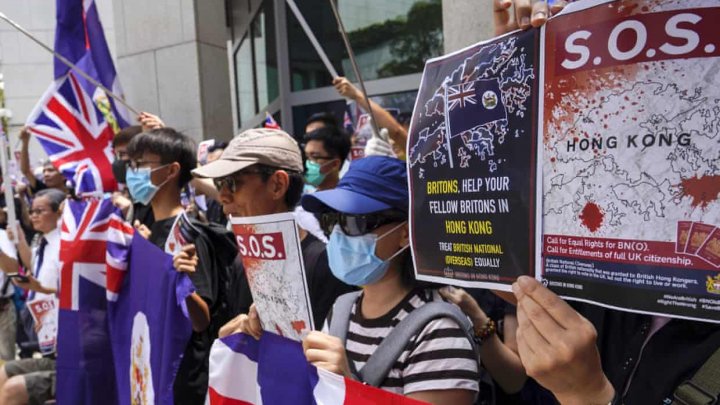 Hundreds of pro-democracy protesters have gathered outside the British consulate in Hong Kong, chanting “we will not surrender” as they called on the UK to come to the aid of the former British colony.

Demonstrators waved the Union Jack, sang God Save the Queen and chanted “Stand for freedom, stand with Hong Kong,” as they sought to bring attention to their calls for democracy in the semi-autonomous territory, which was handed over to Chinese control in 1997.

Demonstrator held SOS Hong Kong signs and one placard quoted Winston Churchill: “We will ride out the storm of war and outlive the menace of tyranny – if necessary for years, if necessary alone.”

Hong Kong was braced for another day of unrest, after ugly scenes of brawls between anti-government and pro-Beijing demonstrators on Saturday, marking the 15th consecutive weekend of mass protests that have plunged the city into its most serious political crisis in decades, writes The Guardian.

Protesters are asking the UK to apply pressure to Beijing to uphold the “one country, two systems” framework. Under the terms of the 1997 handover, Hong Kong was meant to enjoy a high degree of autonomy, including certain freedoms not enjoyed in mainland China. But critics believe those freedoms have been eroded.

China has called the handover agreement signed by the UK and China, the Joint Declaration, a “historical document” with “no practical significance”.

Chinese officials have lashed out at the UK for signalling its support of Hong Kong. A UK foreign office spokeswoman in June said the document was a “legally binding treaty … that remains as valid today as it was when it was signed”.

Some Hong Kong demonstrators, looking for a way to leave the city, have been calling on the UK to extend the rights of British National Overseas (BNO) passports to include the right to live and work in the UK. The passports, which replaced the British Dependent Territories Citizens passports held by three million people in the lead up to the 1997 handover, only grant the right to visit the UK for six months.

Last weekend, thousands marched on the US consulate to call on US lawmakers to pass legislation that could potentially sanction Hong Kong officials, in an effort to step up pressure internationally for their cause.

Beijing and pro-Beijing figures in Hong Kong have previously accused foreign powers like the US and the UK of secretly funding and organising the rallies.

On Saturday, democracy activist and former student leader of the 2014 umbrella movement in Hong Kong Joshua Wong called on US officials to include Hong Kong and a human rights clause in ongoing negotiations as the US and China try to resolve a long-running trade war.

“We hope ... for bipartisan support,” Wong told Reuters, adding that he hoped to convince lawmakers to pass the Hong Kong Human Rights and Democracy Act, which would implement an annual review of Hong Kong’s special status in terms of trade and investment from the US.

Demonstrators vowed to defy a police ban on a previously planned march on Sunday, and were expected to collect in a popular shopping district, Causeway Bay, the site of several previous confrontations between police and protesters.

Rival protesters clashed in fist fights and scuffles in several locations in Hong Kong on Saturday, as pro-Beijing demonstrators staged rallies. Videos showed groups of men using a Chinese flag to beat younger residents. Groups of anti-government demonstrators were seen chasing and hitting people accused of spying on the protesters.