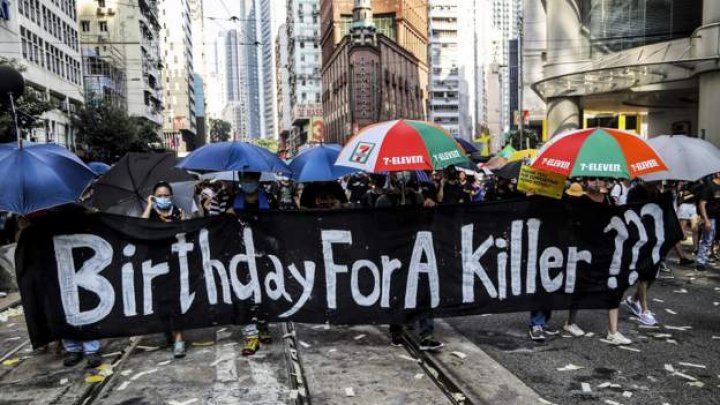 Huge crowds have turned out in Hong Kong on the 70th anniversary of communist rule in China in demonstrations that began peacefully but spiralled into the worst violence of the four-month old protest movement.

The shooting represents a major escalation of force. Although shots have been fired in warning at other protests, and police have caused serious injury with rubber bullets and beanbags, this is the first time someone has been hit with a live round, writes The Guardian.

Crowds gathered at other “day of grief” protests, where police were using water cannon and teargas, fell silent when they heard that a man had been hit.

Images shared by local media appeared to show the man lying on the ground begging for help as he bled from his injury. “Send me to hospital, my chest is hurting. I need to go to hospital,” he said.

Hong Kong’s Hospital Authority said 15 people had been injured, including one – understood to be the protester hit by a live round – in a critical condition in Princess Margaret hospital.

Tens of thousands defied a police ban to march through central Hong Kong, and thousands gathered in other parts of the city. Organisers and protesters said the 70th anniversary of communist rule should be a day of mourning not celebration.

“We want to show people it this is not a happy anniversary,” said Richard Hung, who works in technology. “The CCP (Chinese Communist party) has killed or injured so many millions of people already. We have come out today, because if we don’t, we may not have another chance.”

Police had warned ahead of National Day that they feared violent protests. Organisers had warned that citizens needed a legitimate outlet for their anger after their request for a legal protest was denied.

The day began with an early moment of police aggression, when officers used pepper spray on a small group of protesters outside the government’s official flag-raising ceremony, which was closed to the public.

Many families and young children were among the crowds. “You see we don’t have any protective gear,” said Terrence, a logistics worker walking with his eight-year-old daughter. “We want freedom, and don’t want to belong to China.”

Still, many of those marching wore face masks or carried umbrellas, to stop them being filmed or identified by authorities who have already arrested hundreds.

Graffiti sprayed on metro stations, bus and tram stops and shops considered pro-Beijing included anti-China slogans mocking the day’s celebrations across the border and featured the warning which has become a protest staple: “if you burn, we burn with you”.

Violence broke out early at smaller gatherings around the city, and as some marchers in central Hong Kong headed towards the legislative council and government headquarters, police started using force.

Teargas and water cannon were fired by police, while protesters in threw molotov cocktails and set fire to barricades in the road, amid scenes of mayhem.

Hong Kong has been gripped by a wave of protests since June, sparked by a controversial extradition bill, but the movement has morphed into a wider and increasingly violent anti-government movement channelling residents’ anger and frustration at the erosion of their rights under Chinese rule.

“It’s National Day but there is nothing to be happy about in Hong Kong,” said Sarah, 17. “We’re under one party rule and the Communist party controls our government.”