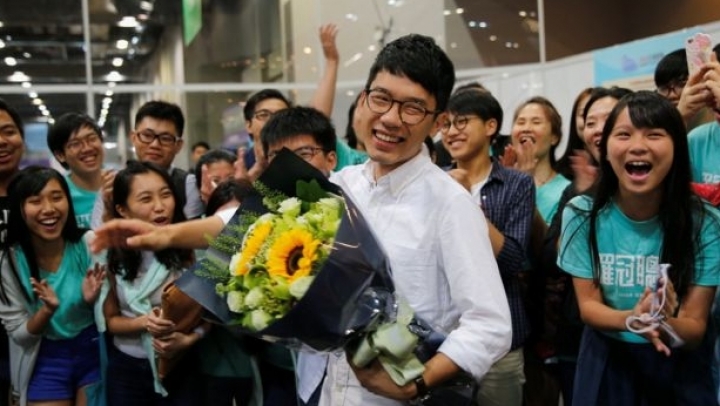 A new generation of activists have for the first time won seats on Hong Kong's Legislative Council (LegCo).

Among them is Nathan Law, one of the young leaders of the mass pro-democracy demonstrations of 2014.
It is the first taste of real political power for the young protest leaders, who want more independence from China for the former British colony.

But pro-Beijing politicians will retain a majority in the 70-seat council, partly because of the electoral system.
Results were delayed by a record turnout, which saw some 58% of 3.8 million registered voters cast their ballots, compared with 45.2% in 2008. Full results are due later on Monday.

What do the activists want? They were demanding greater democracy for the territory amid concerns that Beijing was increasingly interfering in the former British colony's politics, breaking the "one country, two systems" agreement.

Mr Law, whose Demosisto party campaigns for the right to self-determination, had the second highest number of votes in the multi-seat Hong Kong Island constituency.

"People want change, change meaning that they want new faces... but the price is a further fragmentation [of the pro-democracy camp]," Lee Cheuk-yan, who lost out in the New Territories West constituency, told Reuters.
Will these results change anything?

The vote does not elect Hong Kong's chief executive, the head of government, but many analysts believe the outcome could have an impact on whether China grants current leader CY Leung a second term in office.