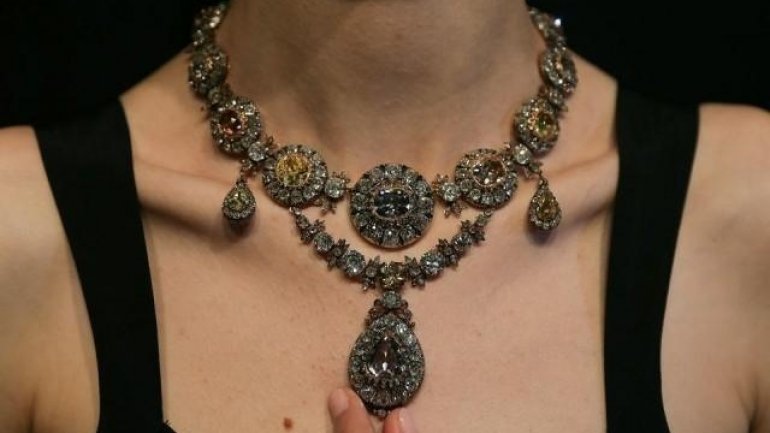 Russian diamonds that reputedly helped broker peace between warring empires three centuries ago are going up for sale in Geneva this week, reports The Guardian.

Held twice a year, the Swiss city’s auctions of rare jewels are often dominated by stones the size of door-stoppers. But this week, gems enriched by the weight of history will share centre-stage with those valued by their weight in carats.

Christie’s begins the auction season on Tuesday at the Four Seasons Hotel des Bergues on Lake Geneva, where a line of Bentleys or Porches typically builds in the run-up to the autumn sale.

Sotheby’s takes its turn on Wednesday across the road at the five-star hotel Beau Rivage. Among the Sotheby’s showcase offers is a parure featuring diamonds once owned by Russian empress Catherine 1 that were given to her by her husband, Tsar Peter the Great, who led Russia until his death in 1725.

In 1711, Catherine was worried that a raging conflict with the Ottoman empire posed an existential threat to Russia and ordered her husband – in the middle of the night – to draft a peace treaty, Sotheby’s said, citing historical records.

Without telling Peter, Catherine sent the peace proposal and all the jewels she was travelling with to the Ottoman sultan, Ahmed III.

The sultan “accepted these and was obviously delighted, and the truce was given and the [Russian] empire was saved”, David Bennet, head of Sotheby’s international jewelry division, told AFP.

The parure featuring Catherine’s diamonds is expected to sell for between $3 million  and $5 million.

In an auction heavy on Russian imperial treasures, Sotheby’s is also offering a diamond necklace with a detachable clasp owned by Empress Catherine II – Catherine the Great, who ruled Russia from 1762 to 1796. It is similarly valued at up to $5 million.

But it is color stones that have set a recent string of eye-popping records. In May, Christie’s set the current mark with the 14.62-carat Oppenheimer Blue, which sold for 56.837 million Swiss francs ($57.6 million).

That beat a record set a year ago by Sotheby’s, when Hong Kong billionaire Joseph Lau’s bought the 12.03-carat Blue Moon of Josephine for $48.4 million.