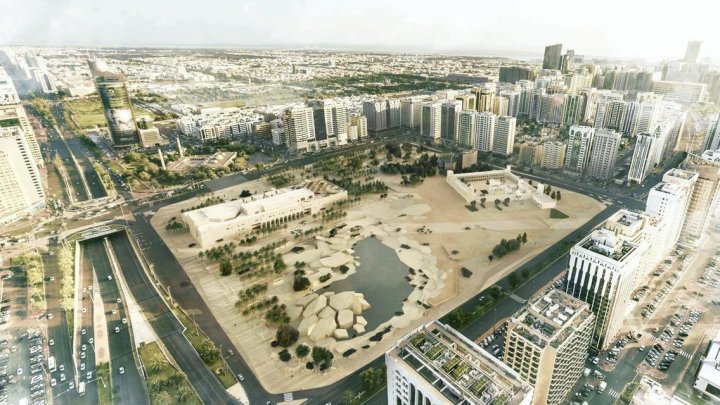 With Abu Dhabi's shining buildings sprawled out across the island, it's difficult to imagine that not even two centuries ago, only one stone building stood tall.

Located in the city's downtown, Qasr Al Hosn, also known as the "Old Fort",  is a physical timeline of the history of the United Arab Emirates' capital.

Since its first stones were laid in the 1760s, Abu Dhabi's oldest building has witnessed the city grow into a bustling metropolis.

And now a new chapter is beginning for the heritage site. After a decade of being hidden behind construction screens while extensive repairs were carried out, the fort is finally reopening to the public.

The revamped site has been transformed into a modern museum narrating the history of the city.

Qasr Al Hosn is made is made up of an Inner Fort that was built in 1795 and an Outer Palace added in the 1940s. The site served as a centre of political power throughout the southern Gulf and was home to the ruling family for nearly 200 years.

"If the walls can talk they would be basically telling you stories left and right," says Al Mubarak pointing to a series of restored rooms that once served as personal quarters for the Emirate's most prominent rulers and their families.

The oldest building on site is the watchtower, which historians like Peter Hellyer say represents a key turning point in Abu Dhabi's history.

"The legend is that in the 1760s, there was a party of tribesmen following the tracks of a gazelle on the mainland; they came to a fjord, they were able to cross it and they followed the tracks of the gazelle and came to where there was a little spring," explains Hellyer who has written and edited six books on the UAE's history and archaeology.

"The history doesn't say what happened to the gazelle, but the story or the legend is that they went back to the sheikh of the tribe who was living in Liwa, Sheikh Dhiyab bin Isa, to report to him and he said establish a settlement on the island."

The fort's museum hosts a variety of objects that detail the growth of the island from early settlement to the eventual centre of government, due to its strategic location within great pearling grounds and along important trade routes.

Letters written by the sheikhs to their confidants as well as interactive video installations shed rare insight on the leaders' decision making processes and vision for the future of the city.

"They basically looked at these buildings and said we want to make sure we have hospitals and schools and clinics and that reality has become true, but it started from here, it started from these humble beginnings and it's something very special to tell their story," says Al Mubarak.

Qasr Al Hosn's restoration process took nearly eleven years to complete from planning stages down to conserving the fort's original details which had begun to show their age.

"We wanted to retain all of the natural fabrics and raw materials that were used when it was originally created and all of them were actually retrieved from the areas surrounding Qasr Al Hosn," explains Saif Ghobash, the Department of Culture and Tourism undersecretary.

A House of Artisans will host demonstrations and workshops of traditional Emirati crafts, such as henna painting and Al Sadu, a form of weaving practised by Bedouin women which was put on UNESCO's intangible cultural heritage list in 2011.

The city's culture enthusiasts will also be pleased with the reopening of the massive Cultural Foundation next to the fort, which houses art studios, lecture rooms and performance spaces.

Qasr Al Hosn officially opens to the public on December 7 2018.