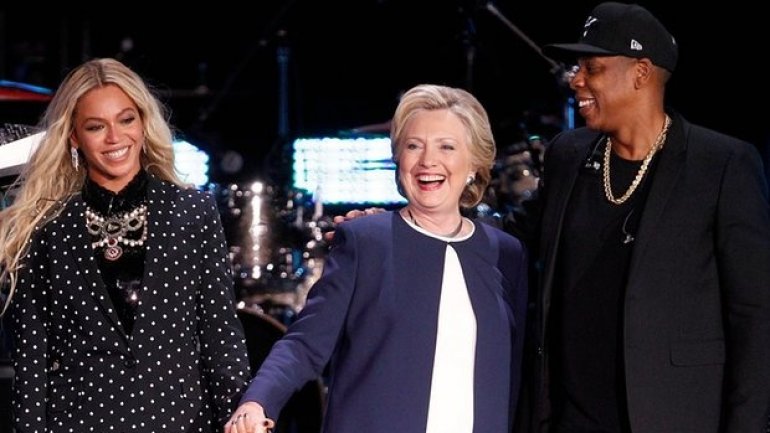 The celebrity cavalry arrived for Hillary Clinton on Friday, as she took the stage with music icons Jay Z and Beyoncé in Cleveland, Ohio, reports The Guardian.

The power couple performed at a get-out-the-vote rally four days before the election, lighting up a crowd of thousands in the hopes of motivating them to get to the polls. Rapper Jay Z hosted a similar concert for Barack Obama in 2008 and declared to those in attendance in the battleground state: “Ohio, we are on the doorsteps of history.”

Adding he had “no ill will” toward Donald Trump, Jay Z, whose legal name is Shawn Carter, said the Republican nominee’s “conversation is divisive”.

The artist and producer shared the stage with Beyoncé, who elicited an unparalleled reception from the crowd of 10,000 people. The global superstar performed hits that included her feminist anthems Run the World (Girls) and Diva.

“There was a time when a woman’s opinion did not matter,” Beyoncé, a self-proclaimed feminist, said.

Urging the audience to cast their ballots, she stated her support for Clinton in no uncertain terms: “I’m with her.”

Although Beyoncé attended a fundraiser for Clinton in New York City last year, Friday night marked her most emphatic show of support for the former secretary of state.

Jay Z previewed the concert earlier this week in a post on Twitter, in which he quoted Nobel Laureate and Holocaust survivor Elie Wiesel.

Hip-hop artists J. Cole, Chance the Rapper and Big Sean also performed on Friday night and underscored the importance of electing the first woman president of the US on 8 November.

The event was one of several efforts by Clinton’s campaign to harness the celebrity power backing her candidacy as voters head to the polls. Last week, Clinton appeared with actress and singer Jennifer Lopez at a concert in Miami also geared toward mobilizing voters to head to the polls. Other music events on Clinton’s behalf in the final week before the campaign included rocker Jon Bon Jovi in Pittsburgh and indie rock band The National in Cincinnati, Ohio.

Hollywood stars have additionally held organizing events for Clinton in key battleground states with the campaign in its final days.

Pop star Katy Perry, one of Clinton’s most vocal surrogates, campaigned on the Democratic nominee’s behalf in Nevada and was slated to appear in Philadelphia this weekend. Miley Cyrus sought to boost enthusiasm among young voters by door-knocking for Clinton at George Mason University in Virginia, while singer Pharrell Williams appeared with Clinton and Vermont senator Bernie Sanders at a rally in Raleigh, North Carolina on Thursday.