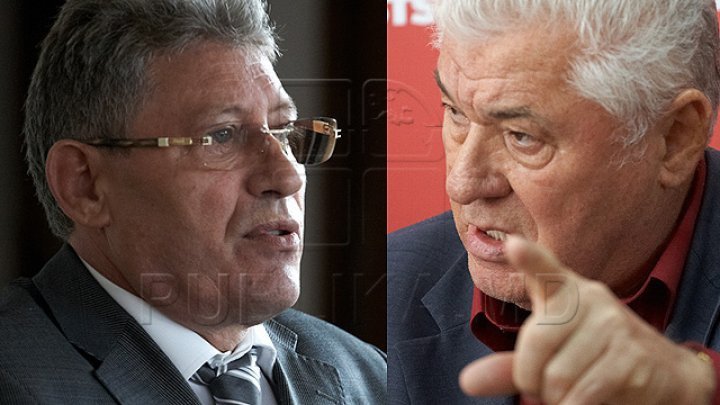 Funny replies at the Parliament meeting today between Vladimir Voronin and Mihai Ghimpu.

The throne of discord was the word "brigade," used by the Liberation leader at the legislative meeting on Thursday.

After Andrian Candu explained to Ghimpu that in Romanian "team of builders" (echipă de constructori) is correct, not "brigade", Ghimpu today came in Parliament with DEX dictionary.

"I want us to read together what DEX says, what a brigade means: A stable workforce formation composed of workers, often grouped by teams, or a large military unit made up of battalions and divisions. Excuse me, you were not right yesterday", said Mihai Ghimpu, PL president.

"I was right, because I did not understand which brigade you are referring to, to the military unit or to the builders? Which you referred to?" Asked Andrian Candu, the Speaker of Parliament.

After the exchange of answers between the two, PCRM leader Vladimir Voronin did not think much and intervened in his characteristic style. The head of the Communists was unhappy with the fact that Mihai Ghimpu approached such topics in Parliamentary.

"I have a more concrete proposal, whenever you give Ghimpu microphone, check if he's connected to the computer and computer is connected to his head", said Vladimir Voronin.

"What I say in the morning? I just simply wonder how citizens allow to have such a president as Voronin? And now he's a deputy and more. It's regrettable to fight between us. It's said that if I'm sick, it means he's also sick", replied Mihai Ghimpu

Other deputies decided to defend Ghimpu.

"I request the President of Parliament to make a warning for the offense committed to Mr. Mihai Ghimpu," said PL deputy Ion Apostol.

"Yes, Mr President Voronin, I warn you! The regulation allows me only three sanctions and I warn you, we really have to respect the limits of common sense," Andrian Candu said.