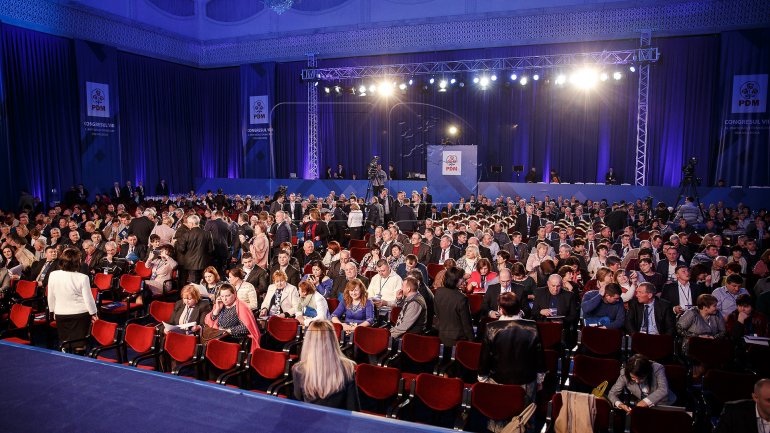 The Democratic Party has been stated as a political force to confront the crisis situations and to bring real benefits to citizens. These were said by say high-ranking guests, who attended the party congress. They expressed confidence that the party will further develop and realize new projects in support of the citizens.

"You understood one thing, that in today's times, Moldova, as any European country, must move forward. You have a very important commitment - European integration. It is time to have less politics. Came the time to reaffirm our identities values and principles. Only then we will fight populism and self-interest policies" said President of the Socialist International, Luis Ayala.

PDM success is also due to the active involvement of women in decision making process. This is the opinion of the representative of Organization of Socialist International Women.

"I know your party for a long time. I know how much lasted until women could enter the ranks of the party. I'm talking about women who are in this party and together with men are adopting the priorities of this party" said Sonja Lokar, representative of the Organization of Women of PSE.

"If you look carefully on my chest you'll notice small badges. There are flags of Georgia and Moldova. They are symbols of friendship. I hope that together we will develop the states so that one day we would live together in a European family, and our citizens will travel across the continent without barriers, "said Dmitri Itskitishvili, Member of Parliament of Georgia.

The former Romanian Prime Minister Victor Ponta received at the congress the highest Moldovan award, the Order of the Republic, for the unconditional support offered to our country.

Victor Ponta, who is now parliamentary, promised help to our country in the future and said that Moldova has a competent government able to pull the country out of crisis:

"I wish you to have a government that loves Moldova. And I want to wish all the success to Mr. Filip. He has the hardest work. But the fact that you managed in 2016 to pass Moldova over difficult times."

The PDM congress was attended by over 900 delegates from all regions of the country, and invited foreign diplomats accredited in the country.