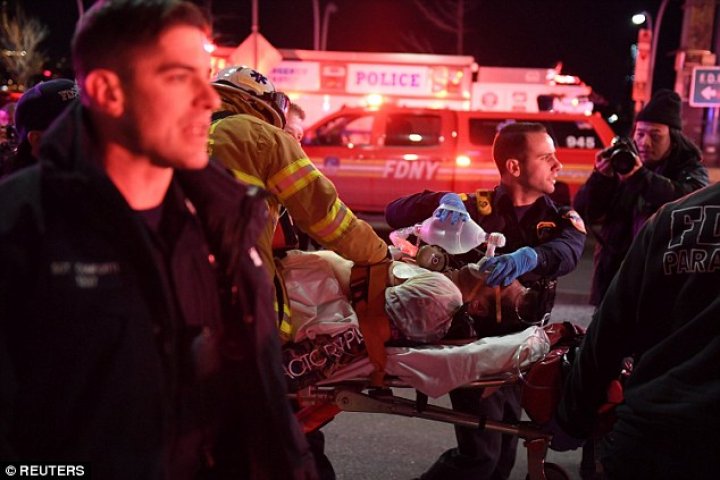 Two of the five passengers died at the scene and three were taken to two area hospitals where they later died, a spokesman for the New York City Police spokesman confirmed early Monday.

The pilot freed himself and was rescued, treated and released in good condition from a hospital, police said.

The Federal Aviation Administration said the Eurocopter AS350 went down near the northern end of Roosevelt Island at about 7 p.m. and was investigating. The National Transportation Safety Board said its investigative team would arrive on Monday.

“It’s a great tragedy,” said New York Fire Commissioner Daniel Nigro at a press conference late Sunday. “It took a while for the divers to get these people out.”

Nigro said when the divers reached the helicopter it was inverted and in 15 meters of water with below 4 degrees Celsius water temperatures and 6 km/h currents.

The passengers were tightly harnessed and the harnesses had to be cut and removed to free the passengers in the helicopter, he added.

A Reuters photographer witnessed three people recovered by rescue divers being wheeled on stretchers onto a midtown pier shortly before 9 p.m.

New York City Police Commissioner James O’Neill said the aircraft was registered to Liberty Helicopters, a sightseeing and charter service in New York, and was on a private charter “photo shoot.”

“It kind of hit sideways and just flipped over,” Brianna Jesme, 22, an Upper East Side resident who witnessed the crash, told Reuters TV.

Video of the incident filmed by an onlooker and posted on Twitter showed a red helicopter descending toward the water at dusk, then landing with a large splash before tipping onto its right side, its tail lights still flashing.

Reuters could not immediately verify the authenticity of the footage.

The NYC Ferry said late Sunday on Twitter that service on the Astoria and East River routes was currently suspended until further notice because of the helicopter crash.