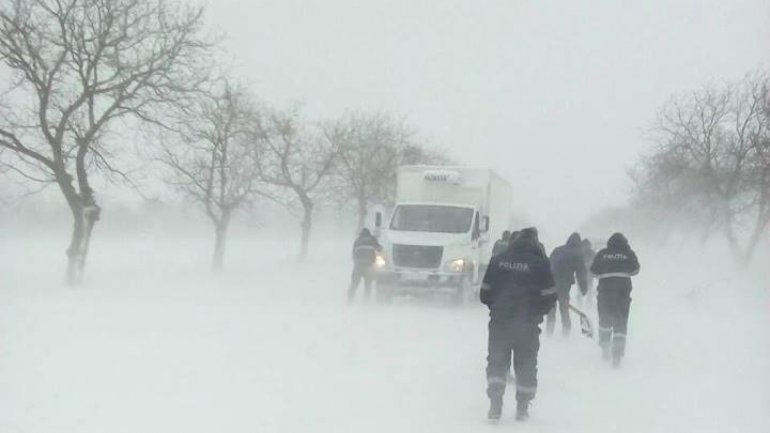 A snow storm is causing havoc in Moldova. Meteorologists have issued Orange Warning for snow and sleet. Movement on some roads is difficult, while accidents kept happening during the whole day. The weather has also caused power outage in nearly 300 settlements.

At the same time, the highway tying Anenii Noi and Căuşeni was closed off due to strong wind, while trucks are forbidden from Chişinău-Leuşeni road, after three tank trucks were stuck there for a few hours.

"The road is blocked there by cars, so we stay here. We cannot proceed further, so we all stopped here."

"The truck is stuck. We are waiting for the road to clear, but one car per 100 km is not of much help"

Despite the fact that the roads were cleaned, the winds brings the snow back on the lane and creates the risk of new blockages. It caused Chișinău-Leușeni highway to be closed off for trucks.

A total of 65 car accidents were registered in Moldova, resulting in 11 injured people.

A minibus transporting a group of people to an enterprise has toppled over and fell in a ditch near Şerpeni village, Anenii Noi district. While on Chişinău- Dubăsari highway, another minibus fell in a groove in Nisporeni, near Bursuc village.

Also read: It snows with accidents! Minibus overturned on highway from Slobozia

"It was very hard to reach here, the roads are blocked. I started helping a colleague to climb up the hill, because no truck would stop to help. It has been two hours or so."

The roads are being cleaned non-stop, but the heavy snow is making the job nearly impossible. So far, over 5 000 tons of non-skid material were scattered on the country's routes. The works being done by 330 technical units and more than 300 workers.

"Now that snow is falling, the team from Nisporeni district is working all the time. The snow is being cleaned off roads, but it is hard to fight against nature" employee Tudor Popa declared.

During an emergency session of the Government, Minister of Economy and Infrastructure, Chiril Gaburici, assured that snow removal works are being urgently performed.

Also read: Pavel Filip: Our main priority are the people and we must offer them all the necessary support
Also read: Over 3,000 tons of slip-resistant material scattered on country's routes
Also read: Silvia Radu summoned emergency meeting. Official requested more winter service vehicles to be dispatched

"There were some difficult situations, for example the Bălţi - Criva highway. The issues was mostly the truck drivers, who unfortunately did not switch to winter tires. There were also a few troubles on Chişinău - Leuşeni highway" Minister of Economy and Infrastructure, Chiril Gaburici declared.

275 settlements from 18 districts are experiencing power outage, while multiple roads from the country were blocked. Prime Minister has requested those problems to be urgently solved.

"Union Fenosa reduced all emergency services and has fewer teams. During the snow storm from last year, we had serious problems with blocked streets. I think it took us a month or even more to reconnect all power supply in localities. It's impossible in the 21st century" Pavel Filip declared.

Not even Customs managed to avoid troubles. Due to power outages in Ukraine, four Customs have suspended their activity. Namely: Ceadîr-Lunga - Maloiaroslaveț, Ceadîr-Lunga - Novîie-Traianî, Mirnoe-Tabaki and Etulia - Nagornoe. The road leading to the Customs from Hîrbovăț was snowed in, traveling between Bender city and Bulboaca village being impossible.

Authorities recommend people to avoid those crossing points. Patrol officers are monitoring all the roads from the country.

"There is no difficulty in traffic here. The only issues are the drivers that speed. We pull them over and warn them to turn on their headlights and be more careful, to maintain distance between vehicles" police officer Adrian Leonte said.

At Government's request, three teams to operate in crisis situations in the North, South and Central part of the country were established.

According to meteorologists, Orange Warning for snow will be valid until this evening. In the next few days, temperatures will rise and snow will fall in certain regions.