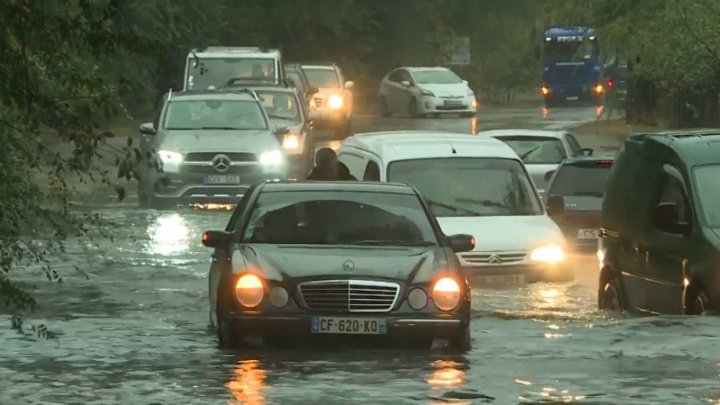 Chisinau city gave way to the torrential rain yesterday! Within minutes, several streets were engulfed in floodwaters and dozens of cars stranded in traffic and required rescue. 70 workers with 30 trucks intervened in all sectors of the city.

One of the most affected streets was Varniţa which turned into a river after a few minutes of rain. Some drivers waited in the cars for rescuers, others pushed roughly the cars.

The sewerage network also collapsed, and the waters overflowed.

Several cars and trolleybuses were blocked as well on the flooded Munceşti Street.

Several cars parked on Voluntarilor Street in the Ciocana sector were half covered by water, while traffic jam occurred in the area of the North Station and near the Botanical Garden. Due to heavy rain, visibility was reduced.

Several trolleybuses were blocked on Ion Creangă, Uzinelor, Muncești, Meşterul Manole, Calea Ieșilor and Calea Orheiului streets. From 8 am until 2 pm, the trolleybuses on the 12 lines ran on modified routes and had considerable delays.

The rain finally stopped at noon, the black clouds scattered and the sun came up.