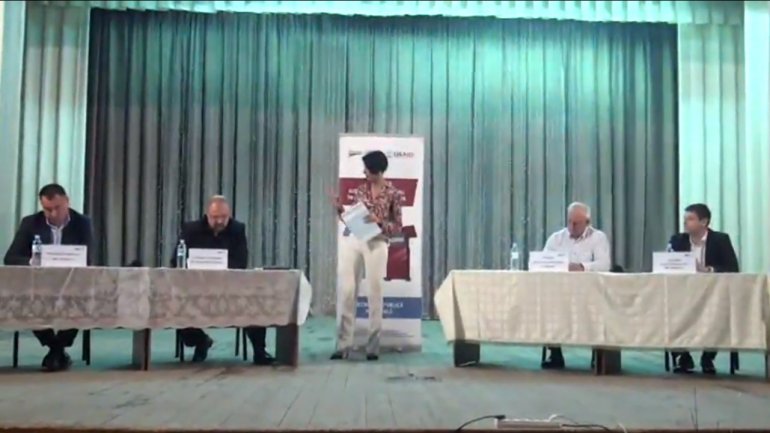 The advantages of the mixed voting system were discussed today, June 24th, in Cahul town. The debate was organized by Promo-LEX Association.

The topic on the possibility to elect their own deputies was discussed by MPs who urged the introduction of the electoral system reform and locals.

Several have criticized the opposition parties what are against the electoral reform. The representatives of the opposition have tried to convince locals of the disadvantages of the reform.

"You, most certainly, won't be able to choose the person you want. All will be corrupted" , said Dignity and Truth party member, Chiril Motpan.

However, most of the persons gathered at the event stated they want to choose their own deputies.

"Why are you afraid of the mixed, uninominal voting system? How much longer you plan to manipulate civil society?"

"For 20 something Moldova has voted with party lists. There was no success. It's time to change the political class"

The deputies were asked to come back when they have ideas on how to punish those who don't respect their obligations.

"I insist you change the Constitution in order for those who don't honor their obligations to be withdrawn."

"This is our commitment for 2022 onwards: to change the Constitution in order for citizens to be able to dismiss deputies" , said PDM member, Anatolie Zagorodny.

As usual, the debate was heated.

"The implementation of this system means blackmailing MPs will be a regular" , said PLDM member, Alexandru Bujoreanu.

On the other hand, the Socialists reminded the Liberal Democrats those things are seen among the PLDM party.

"A lot of former members of Maia Sandu's party, Dignity and Truth party, PSRM and PPEM are seen changing their views and parties" , said the deputy PSRM, Adrian Lebedinschi.

The Liberal Democrats admitted that they would want the citizens to decide the electoral roll of the candidates.

The Cahul town debate was the fourth in a series of six regional debates on electoral reform, organized by the Promo-Lex Association.