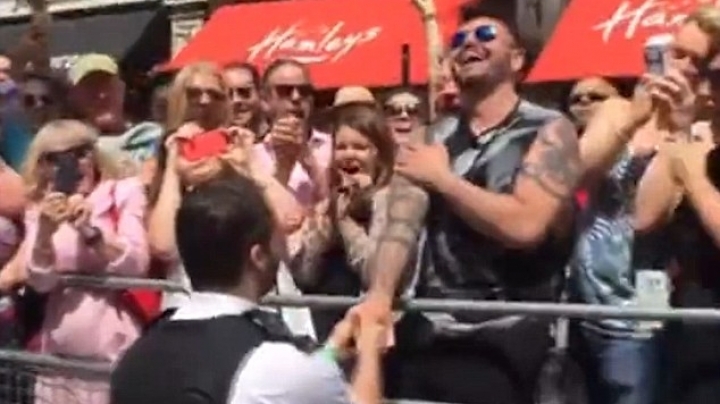 It's the annual celebration of LGBT rights that is celebrated across the nation, reports Daily Mail.

And today at Pride in London, one policeman involved in the parade took the opportunity to break ranks and pop the question to his boyfriend - much to the delight of the cheering crowds.

Heartwarming footage shows the policemen and women marching in formation during the parade on Regent Street in the heart of London.

But one policeman breaks ranks and gets down on one knee to his boyfriend, Jonathan Sammons, who is in the crowd with friends.

His delighted boyfriend immediately says yes, and the pair embrace.

The crowd around them break into cheers as the happy couple lock lips, and someone passes the newly engaged couple two glasses of prosecco.

The policeman then gets back into the parade formation to continue the march.

Mr Sammons told ITV News: 'Speechless! Amazing! Oh my God, I can't believe he did it.'

His policeman partner said: 'It's been planned for a while but not like this'

Around 80 police officers took part in Pride today, while thousands flocked to the capital to take part in the celebrations.