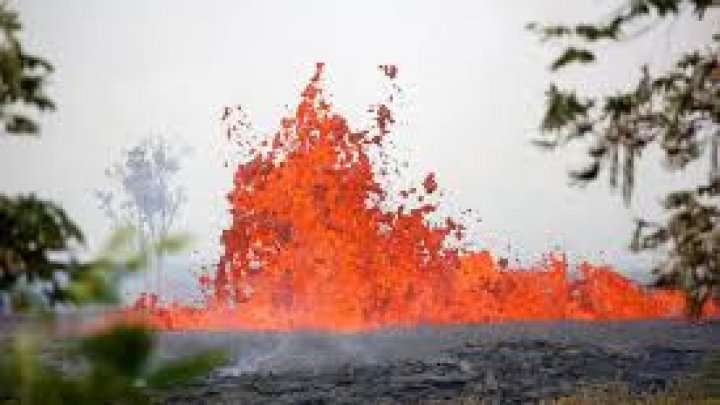 A stream of lava threatened to block a key Hawaii highway on Sunday that serves as an escape route for coastal residents, while the first known serious injury was reported from fresh explosive eruptions from the Kilauea volcano, writes Reuters.

A homeowner on Noni Farms Road who was on a third-floor balcony had his leg shattered from his shin to his foot when hit by lava spatter, said Janet Snyder, a spokesperson for the Office of the Mayor, County of Hawaii.

She added that lava spatters “can weigh as much as a refrigerator and even small pieces of spatter can kill.” No other information was immediately available.

The erupting lava, which can reach a blistering 2,000 degrees Fahrenheit (1,093 degrees Celsius), was expected to hit Highway 137 overnight if it kept up its rate and direction of flow, the County of Hawaii’s Civil Defense Agency said.

Authorities are trying to open up a road that was blocked by lava in 2014 to serve as an alternative escape route should Highway 137 or another exit route, Highway 130, be blocked, Jessica Ferracane of the National Park Service told reporters.

The park service is working to bulldoze almost a mile of hardened lava out of the way on nearby Highway 11, which has been impassable, she added.

But officials went house-to-house in the area to urge more residents to flee, Snyder said, though no head count of the new evacuation was available early Sunday.

For weeks, geologists have warned that hotter, fresher magma from Kilauea’s summit would run underground and emerge some 25 miles east in the lower Puna district, where older, cooler lava has already destroyed 44 homes and other structures.

“There is much more stuff coming out of the ground and its going to produce flows that will move much further away.”

Fountains of bright orange lava were seen spouting at least 20-feet high, and spewing rivers of molten rock on Saturday.

Carolyn Pearcheta, operational geologist at the Hawaii Volcano Authority, told reporters that hotter and more viscous lava could be on the way, with fountains spurting as high as 600 feet, as seen in a 1955 eruption.

“We’ve seen the clearing out of the system,” she said. “We call that the ‘throat clearing’ phase.”