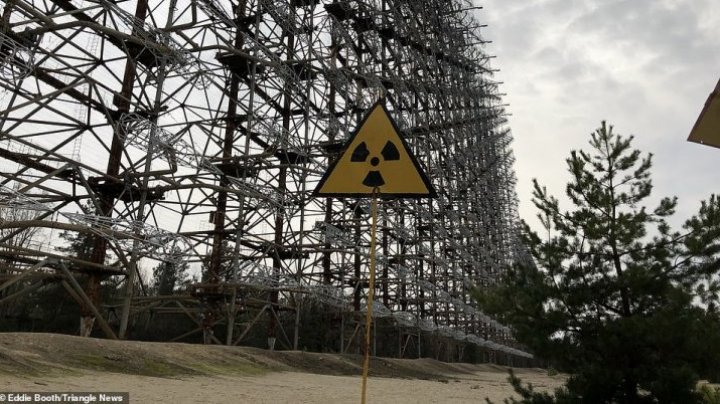 Haunting images show the wasteland ruins around Chernobyl, with houses frozen in time after thousands of residents were evacuated from the horrific nuclear accident in 1986.

Photos show an abandoned sports centre, eerie children's hospital and shops with products left lying on the shelves for more than 30 years in Pripyat in the Ukraine.

Children's cribs lie rusted and unused in a barren ward as paint peels off the walls while a crumbling supermarket remains suspended in time, with fridges and shopping trolleys lying on the ground nearby.

Pripyat - on the Ukrainian Belarus border - was built in 1970 to house workers at the Chernobyl Nuclear Power Plant and was supposed to be a model for socialism.

At its peak in 1979 it had a population of almost 50,000 but it was hit by disaster on April 26, 1986, when a reactor at the power plant exploded during a late night test, sending radioactive products into the air.

Much of the fallout landed on Belarus, moving as far as Europe and even the UK on westerly winds.

A 20 mile exclusion zone still exists around the site of the nuclear power plant, leaving dozens of former residential areas rotting and never lived in.

Mr Booth drove from his home in Lockerbie, south west Scotland, to the disaster site.

'We picked up a tour guide in Kiev and she did all the paperwork for us. So we got a private tour for the whole day for £200 each.'

The pair saw hundreds of abandoned flats and homes, with many still displaying mundane signs of life that were simply left when people fled 32 years ago.

Many pictures show gas pipes over ground because the town was built so hastily workers didn't have time to bury them.

'Everything is just left how it was,' Mr Booth said.

'Obviously the valuable stuff has been taken but everything else is still there. Clothes are all over the floor and a lot of it has been looted.

'I've always wanted to go. You watch the films but once you get there it seems a lot different.

'It's a whole abandoned city, it's quiet and there's just this emptiness. I've visited abandoned warehouses but that's just one building.

Mr Booth and Mr Hudson saw machinery used on the day of the explosion left lying untouched in a playground.

Many broke down because their electrical components couldn't take the level of radiation being pumped out by the busted reactor.

The friends drove past the Pripyat sign, commemorating the year the town was built in 1970.

And they also took in memorial signs showing the names of every abandoned town, village and hamlet, as well as the Chernobyl angel, a trumpeting angel signifying hope.

A dusty track then leads to Pripyat, with the old main road now covered in trees and weeds.

It opens out into a central square where trees now grow out of the concrete. A swimming pool, gym, hospital, supermarkets and apartments lie ghost-like, ravaged by time.

At a supermarket there are fridges and shelves still in place, while signs showing the aisle names still swing in the breeze.

Mechanics for the town's theatre remain suspended from the roof, with the stage still intact, while boards showing the candidates in an upcoming election are stored in a room in a town centre building where no-one ever got to cast their vote.

Perhaps most eerie of all is the Pripyat Funfair, which was due to open on May 1, 1986, but never did due to the Chernobyl disaster.

Dodgem cars are left unused on the track while the ferris wheel - left entirely open to the elements - is unturnable and rusting away.

Street signs outside have protective masks hanging off them, although by the time the town was evacuated many had already received a large dose of radiation.

Cancer rates in the area are much higher and many former residents say they suffered crippling health problems from just a day's dose of the fallout.