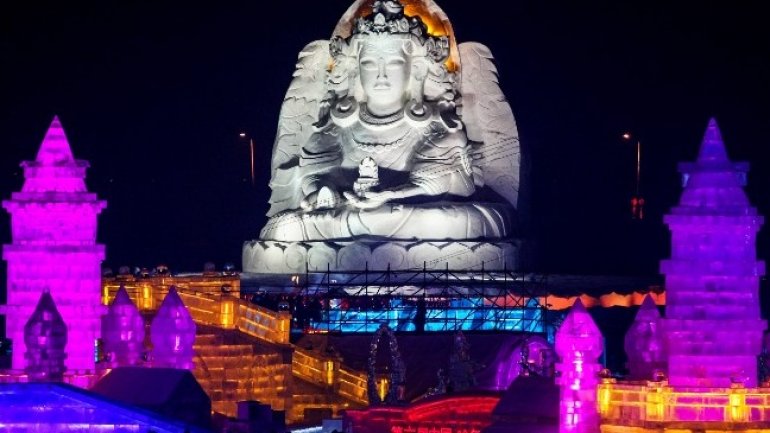 The Harbin International Snow and Ice Festival, famed for its gigantic illuminated sculptures, has officially kicked off in northern China, informs CNN.

The annual event, held in the capital of Heilongjiang Province, is now in its 33rd year.

The festival is made up of several themed zones. The main attraction is the Harbin Ice and Snow World, which covers more than 750,000 square meters and features up to 180,000 cubic meters of ice.

What's perhaps most remarkable about the event is the fact the ice is sourced from Harbin's Songhua River.

According to a China Daily report, more than 50 farmers worked for 20 days to supply Harbin International Snow and Ice Festival's sculptors with blocks of ice from the river.

The best time to go is at night, when sculptures are illuminated with LED lights.

Though it's been open to visitors since late December, the official launch took place on January 5.

Since 1985, the Harbin International Snow and Ice Festival has grown to become one of the biggest snow festival destinations in the world, joining the ranks of the Sapporo Snow Festival in Japan, Canada's Quebec Winter Carnival and Norway's Holmenkollen Ski Festival.

There's just one deterrent. It's cold. Very cold. January daytime temperatures in Harbin range from minus 13 to minus 24 Celsius.

The city is, after all, pretty close to Russia, its northern neighbor's influence permeating everything from architecture to food.

But there is an upside to the chill. The sculptures can stick around for quite a while.

Depending on weather conditions, the festival usually lasts until late February.