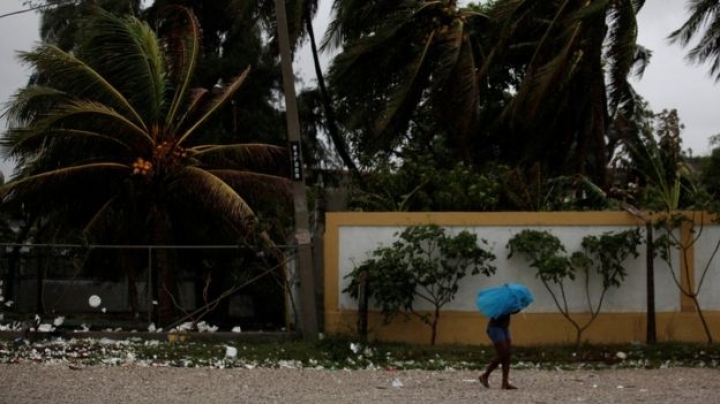 Haiti braced for a brutal beating early Tuesday as Hurricane Matthew slowly closed in on the Caribbean nation, reports CNN.

The storm packing 145-mph winds had already killed at least three people, caused cruise ships to change course and prompted the governors of Florida and North Carolina to declare states of emergency.

At 2 a.m. ET Monday, the Category 4 hurricane was plodding along at about 8 mph and was about 60 miles south of Tiburon and 165 miles away from Port-au-Prince, Haiti's capital and largest city, the US National Hurricane Center said.

Ferocious rain and wind already had begun to thrash Haiti. Haiti's Civil Protection Agency reported the coastal towns of Anse-d'Hainault and Tiburon had partially flooded. Up to 40 inches of rain could be dumped on the impoverished nation -- one still recovering from a devastating earthquake that struck six years ago.

As Matthew started to drench Haiti with dozens of inches of rain, Cuba, the Bahamas and the United States took steps to prepare for the storm's arrival in the coming days.

Three people have died because of Hurricane Matthew within the past week, authorities said.

In Haiti, one fisherman died on Sunday. A second fisherman is presumed dead, but his body has not been recovered.

In St. Vincent and the Grenadines, a teenage boy died in a landslide as he was cleaning a drain behind his house, according to Michelle Forbes, deputy director for the National Emergency Management Office. The boy died Wednesday after storms from Matthew passed over the island.

The hurricane could cause further devastation for Haiti as much of the country's infrastructure remains weak after the 2010 earthquake that killed more than 200,000 people.

After the storm clears Haiti, standing water would likely continue to plague the nation. Haiti continues to recover from a post-quake cholera outbreak that killed another 10,000.

After passing through Haiti, forecasters expect Matthew to churn toward eastern Cuba, where it is expected to make landfall Tuesday afternoon. The storm could dump up to 20 inches of rain in some isolated parts of the country.

Over the weekend, meteorologists had predicted Matthew would largely miss the US. But the latest extended forecast now shows that the hurricane has made a westward turn toward the US East Coast.

Taking advanced precautions, North Carolina Gov. Pat McCrory also declared a state of emergency for more than half of the state's counties.

Forecasters cautioned it was too early to predict how hard the hurricane would strike the United States.