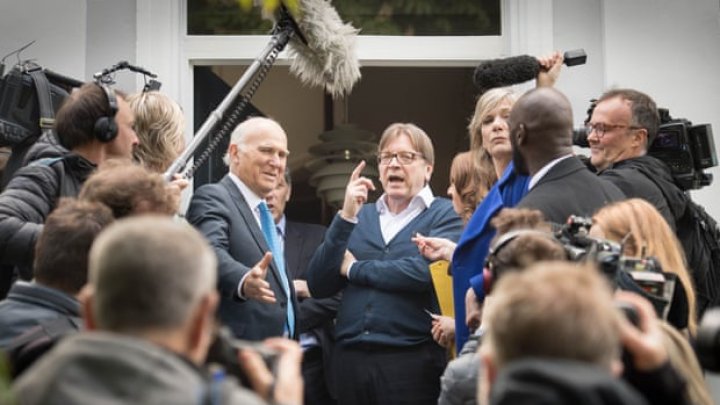 The European parliament’s Brexit coordinator, Guy Verhofstadt, has warned that the UK’s decision to leave the EU has already done “far more damage than has ever been predicted”, wrote theguardian.com.

Appearing alongside the Liberal Democrat leader, Vince Cable, at a European election campaign event in Camden, north London, on Friday morning, the leader of the Alliance for Liberals and Democrats for Europe said he wanted to send a message to people on the continent to “never repeat Brexit again”.

Verhofstadt, a former prime minister of Belgium, has been criticised for comments he made in a BBC documentary, in which he joked that Olly Robbins, the UK’s chief negotiator, had asked him for Belgian citizenship. His aide was also recorded describing Theresa May’s actions as insane and pathetic.

Asked about the comments, Verhofstadt said the description of the prime minister had been taken out of context and the Robbins anecdote was “a funny joke. Where is your British sense of humour? I hope that in Brexit you don’t lose that. Your famous sense of humour.”

Speaking before Verhofstadt’s arrival, Cable said that using such language to talk about the prime minister “isn’t my style”. “I would rather we treated the British prime minister, whether in the UK or Europe, in a properly respectful way. It shouldn’t be personalised,” he said.

Verhofstadt and Cable posed for photographs in front of about 30 Lib Dem activists before going canvassing, which consisted of knocking on one door – that of a man who plans to vote Liberal Democrat.

“I’m not here as a Brexit negotiator,” Verhofstadt told journalists. “I’m here as leader of the Liberal Democrats for Europe to support the most European party, the Lib Dems.” He added: “I think it’s good ground to launch our programme – in London, in Britain – because it’s already clear that Brexit has done far more damage than has ever been predicted.

“I think it’s important to show that the European liberals and democrats support Vince Cable, support the Lib Dems in this difficult fight in Britain, in these European elections. Secondly, we want to show by coming here a message to the continent to say never repeat Brexit again.

“I’m a Lib Dem. It’s natural that people are looking to the Lib Dems when it comes to European elections. We want to be the alternative for nationalism and popularism. What I think is there will be a huge support for remain.”